When Jesús Romero, lead scientist at TAE Technologies, was a child, his father used to bring home a newspaper every Sunday. Inside was a little newspaper for kids that included puzzles. The puzzles were often mazes, where the goal was to help a cartoon animal find the right path through various “dangers” to reach the prize at the end. Romero quickly recognized that puzzles were easier to solve if you started at the end and worked your way backward. He tells this story as a buildup to describe a poster at the entrance of TAE in California. The poster features the company’s late technology co-founder, Norman Rostoker, in a cowboy hat, and a quote: “We started with the end in mind.”

The end that TAE has in mind is safe nuclear fusion power. Fusion power is a goal that many have been working toward for decades. But the timeline for achieving terrestrial fusion has largely depended on technology catching up with the science, which is now accelerating exponentially. Once achieved, fusion would provide cheap, green, nearly endless energy, and transform society.

Existing nuclear power plants use fission, the splitting of atoms. In fusion, atoms are forced to join. It’s a much harder task but releases much more energy. Stars, including the sun, are powered by nuclear fusion. Fusion energy creates no air pollution, comes without the threat of nuclear meltdown, has zero greenhouse gas emissions, and doesn’t create long-term radioactive waste. 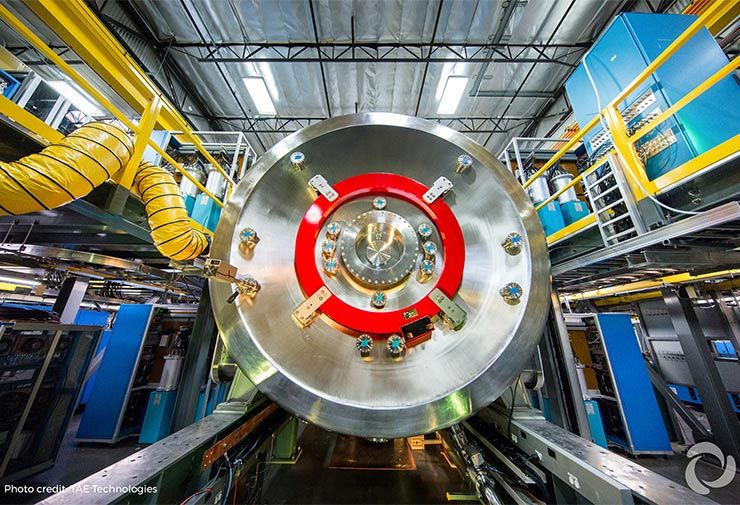 The prevailing approach fuses two types of hydrogen atoms: deuterium, which has one proton and one neutron in the nucleus, and tritium, which has one proton and two neutrons. Protons are positively charged and repel each other. Fusion requires enough pressure and heat for them to collide at high speed. The heat needed, on the order of hundreds of millions of degrees Celsius, is enough to melt anything that might contain the plasma—an ionized gas in which electrons and nuclei fly around independently. Strong magnetic fields are used to center the plasma inside reactors, away from the walls.

Most deuterium-tritium reactors are toroids, the geometrical term for a doughnut shape. These systems face challenges including the need for deuterium-tritium handling facilities, the extremely limited availability of tritium, and the size and cost of the superconductor magnets.

The TAE team realized there was a different way. They began with the end in mind: What would a truly safe reactor look like? They concluded that the only answer was to use hydrogen-boron fusion. This reaction only gives off three helium nuclei, also called alpha particles—hence TAE’s original name, Tri Alpha Energy—and X-rays, which can be captured to generate electricity by heating metal panels to cause liquid CO2 to evaporate and drive a turbine.

Rostoker, who was a physics professor at the University of California, Irvine; his student Michl Binderbauer; and everyone involved in the early days of the company began tackling the problem in the early 1990s, founding TAE in 1998. Binderbauer is now the company’s CEO. TAE has applied for or received more than 1,400 patents and received more than $750 million in venture capital. They’ve run more than 100,000 experiments and now employ about 200 people from over 30 countries. They’re currently on their fifth-generation experimental reactor, named Norman, after the late Rostoker.

TAE’s fusion platform is a field-reversed configuration (FRC), a straight 20-meter-long tube surrounded by circular magnets. Gas is fired at high speed from each end. TAE plans to eventually use a mixture of hydrogen and boron, but until they reach sufficient temperatures, they’re using hydrogen and deuterium.

The streams collide and merge and start rotating. A set of eight accelerator beams outside the central chamber shoot neutral particles—deuterium—at the plasma, which heats it up and keeps it spinning. When the plasma spins, it creates its own magnetic field, helping to keep it contained.

When two particles fly past each other, their chance of hitting head-on and fusing is very slim. That’s why the reactor keeps the plasma contained and circulating. “It gives the particles a greater probability of a collision,” Romero says. The problem is that the plasma is unstable and wants to diffuse.

Keeping the reaction going requires constant measurement and adjustment. The chamber is surrounded by more than 300 magnetic sensors used to infer the shape and location of the plasma inside. Computers with custom field-programmable gate arrays (FPGAs) continuously collect the data and use it to control magnets that then shape the plasma. The entire detection-reaction loop needs to happen in under 10 microseconds, or 10 millionths of a second.

Norman uses seven FPGA-based modules for sensing and control. Four acquisition modules receive input from the sensors and condense the information to 20 numbers that describe the current state of the plasma, which they send to a communications module. This then sends the information to two control modules, which decide how to adjust to the plasma’s state and pass their signals on to the magnets. The FPGAs were all programmed with MATLAB® and Simulink®.

Measuring each plasma particle is impossible, so the system finds the plasma’s location in a “state space,” describing it using a small set of variables. It’s essentially an abstract model of the plasma. Part of the acquisition system’s job is to use the input from hundreds of magnetic sensors to find the plasma’s location in 20-dimensional state space. To show that it could do so in the time allotted, MathWorks was asked to design an acquisition algorithm for the FPGAs that would multiply 1000 numbers by 1000 numbers in under 10 microseconds.

“I’ve been designing FPGAs for over three decades, and getting them to run that fast was a challenge,” says Jonathan Young, a technical consultant at MathWorks.

Because FPGAs have parallel circuitry, programmers need to orchestrate the timing of calculations so that each step receives all its inputs in time. Young used Simulink to visually move blocks of logic around, connect them with virtual wires, and observe their timing. It’s like designing a city grid to reduce traffic. MATLAB then translates the algorithm into code used to configure the FPGA.

“We’re basically writing the book about FRC control as we go.”

In the end, the math got down to 3 microseconds. “The amazing part was just to get that many calculations done that fast,” Young says. “TAE needed the calculations to complete in less than 10 microseconds, and we were able to beat that goal.”

The acquisition and control modules were designed by Speedgoat using Xilinx® FPGAs. “We’ve never had such a huge setup,” says Patrick Herzig, head of FPGA technologies at Speedgoat. Whereas Norman uses seven modules, a typical project uses one. And TAE is looking to include diagnostic signals from more than just the magnetic sensors.

Romero says, “We’re extending the tentacles to control more and more things, such as plasma density. We’re basically writing the book about FRC control as we go.”

The End Is Green

TAE is making steady progress. Despite the challenge of the physics of ultra-high-temperature plasmas, one advantage of FRCs is that they’re mechanically simpler to build and maintain than classical toroidal-shaped reactors. Romero recalls inviting visitors to the facility before one of their fusion devices was built and showing them an empty room. “Here we’re going to build this, and in a couple of years, we’re going to have everything ready,” he recalls telling them. “And their reaction was, ‘No way.’ And we brought them back one year later, and we had the system up and running, and it was mind-blowing for them.” 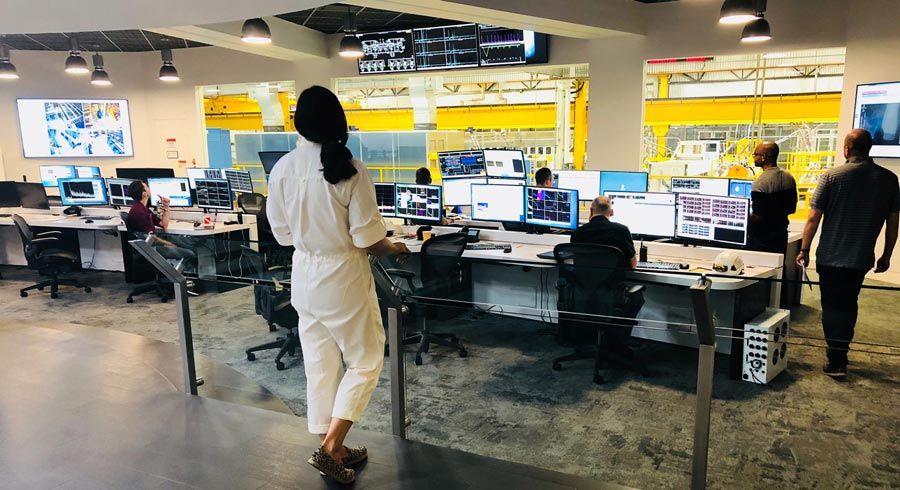 TAE has now demonstrated that they can actively control the plasma. They’ve also demonstrated that the experiments scale well—as they add more power, the temperature doesn’t plateau. The hardest questions about what’s possible have been answered. Rather than scaling up, only to find that the underlying ideas don’t work, “We believe in what we call ‘fail-first,’ ” Romero says. “It doesn’t make sense to delay the showstopper until the end.”

TAE’s next fusion device, Copernicus, is currently in development. It is a reactor-scale platform designed to operate at about 100 million degrees Celsius, around the same temperatures required for deuterium-tritium fusion (however, Copernicus will not be fueled by tritium). TAE then plans to construct a final prototype called Da Vinci to demonstrate net energy gain out of the hydrogen-boron fuel cycle, meaning the reaction can produce more energy than is put it into it.

“We are in the business of providing a comprehensive solution for a transition to a non-carbon economy.”

The power needed to run one brief experiment is more than is allocated to commercial office space, so TAE has had to become expert at power management, storing and deploying power strategically. They’re now in talks to commercialize these innovations. The end they have in mind lies beyond a fusion power reactor.

“We are not just in the business of generating electricity,” Romero says. “We are in the business of providing a comprehensive solution for a transition to a non-carbon economy. It doesn’t really matter if you provide all the electricity. If you still have cars that are based on petrol, then you’re not solving the problem.”

An Intensive Push to Make Ventilators for the COVID-19 Pandemic

Making Better Beer and Wine with Data and Machine Learning

GPS-Wearing Dogs, an Electronic Nose, and a Robot That Pours the Perfect Beer