Motor Control with Arduino: A Case Study in Data-Driven Modeling and Control Design

When first-principles modeling is not feasible, an alternative is to develop models from input-output measurements of the plant. A low-order, linear model might be sufficient for designing a basic controller. Detailed analysis and design of a higher-performance controller requires a higher-fidelity and possibly nonlinear model.

Using a simple control system for a DC motor as an example, this article shows how to identify a plant model from input-output data, use the identified model to design a controller, and implement it. The workflow includes the following steps: acquiring data, identifying linear and nonlinear plant models, designing and simulating feedback controllers, and implementing these controllers on an embedded microprocessor for real-time testing.

The models and scripts used in this example are available for download.

The physical system is a DC motor connected to an Arduino® Uno board via a motor driver (Figure 1). We want to design a feedback controller for this motor to track a reference position. The controller will generate the appropriate voltage command based on the motor position reference data. When applied to the motor, this voltage will cause the motor to generate the torque that turns the motor shaft. We will use a potentiometer to measure the angle of rotation of the motor shaft, and feed this angle back to the controller. 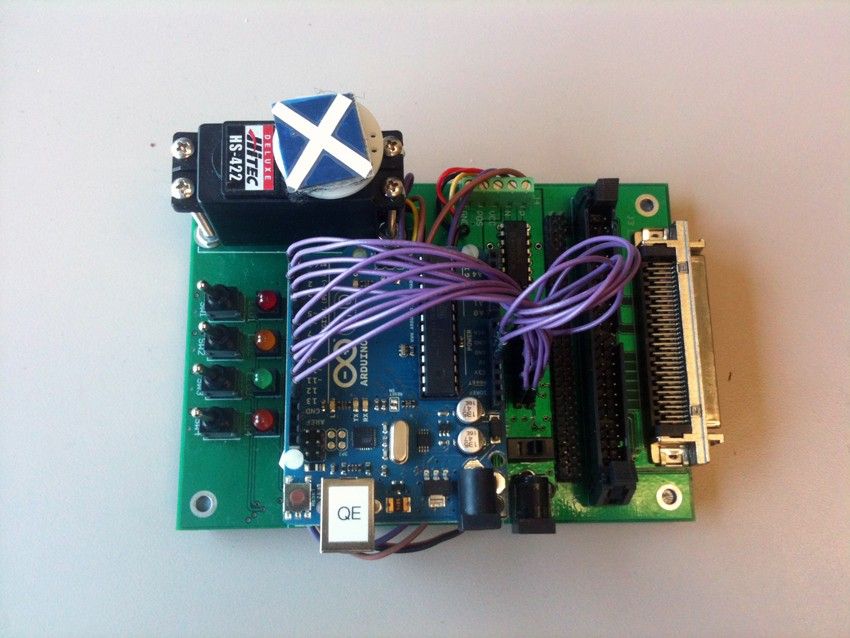 Figure 1. Arduino Board connected to the DC motor.

The motor driver integrated circuit (IC) increases the current capability and can drive the motor in both directions. We receive the motor position data through an Analog Input pin on the Arduino board and compute the error between the reference and actual data (the controller input). We send a voltage command (the controller output) to two Analog Output pins on the board as PWM signals. These signals are fed to the driver IC that provides the motor with the appropriate drive currents.

The controller must keep the system stable and provide fast reference tracking with minimal steady-state error and overshoot.

We connect the host PC to the Arduino board using a Simulink® capability that lets you generate an executable and run it on selected hardware. Figure 2 shows the Simulink library for use with Arduino hardware. 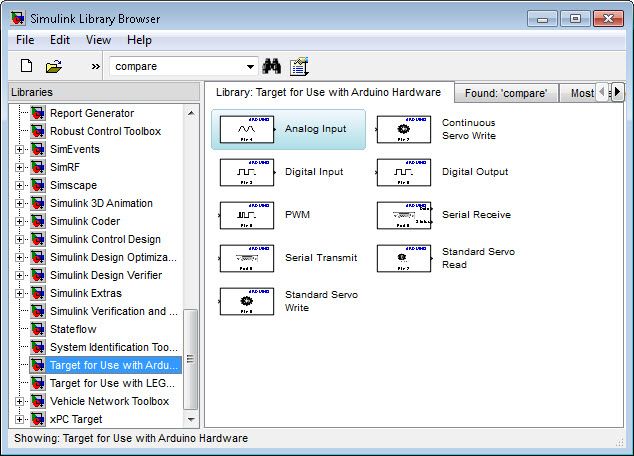 Figure 2. Simulink block library: Target for Use with Arduino Hardware.

In the model that will run on the Arduino Uno board (Figure 3), the MATLAB® Function block Voltage Command To Pins reads from the serial port and routes the voltage commands to the appropriate pins. We use serial communication protocol to enable the host computer to communicate with the Arduino board. In the CreateMessage subsystem, a complete serial message is generated from the motor position data obtained from one of the analog input pins on the board. 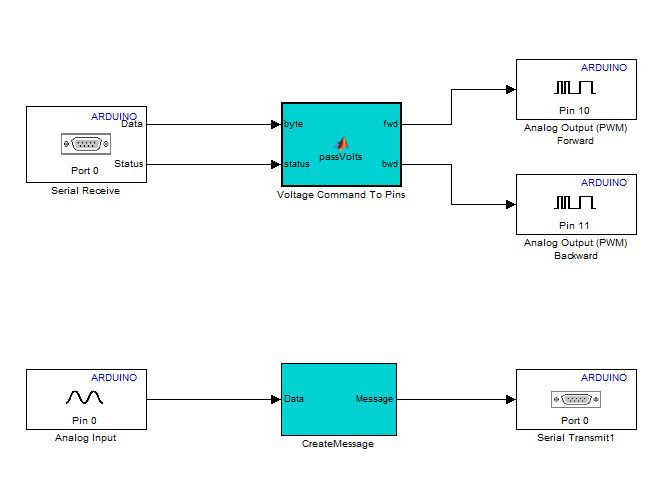 Figure 3. Simulink model that will run on the Arduino board.

We create a real-time application from the model by selecting Tools > Run on Target Hardware > Run. We are then ready to acquire the input/output data using the model that will run on the host computer (Figure 4).

Figure 4. Model that will run on the host machine.

We send various voltage profiles to excite the system, and record and log the corresponding position data. At the end of the simulation, the signal logging feature in Simulink will create a Simulink data set object in the workspace containing all the logged signals as time-series objects.

We will be working with 12 data sets. These data sets were selected to ensure adequate excitation of the system and to provide sufficient data for model validation.

Developing plant models using system identification techniques involves a tradeoff between model fidelity and modeling effort. The more accurate the model, the higher the cost in terms of effort and computational time. The goal is to find the simplest model that will adequately capture the dynamics of the system.

Using the iddata objects, we first estimate a linear dynamic model for the plant as a continuous-time transfer function. For this estimation, we specify the number of poles and zeros. System Identification Toolbox then automatically determines their locations to maximize the fit to the selected data sets.

We launch the System Identification Tool by executing

We can import the data sets into the tool from the base workspace using the Import Data pull-down menu (Figure 5). We also have the option to preprocess the imported data. To start the estimation process, we select the working data that will be used to estimate a model and the validation data against which the estimated model will be tested. We can use the same data set for both estimation and validation initially, and then use other data sets to confirm our results. Figure 5 shows the System Identification Tool with the data set imported. The estimation data set, data set 11, comes from an experiment designed to avoid exciting nonlinearities in the system. 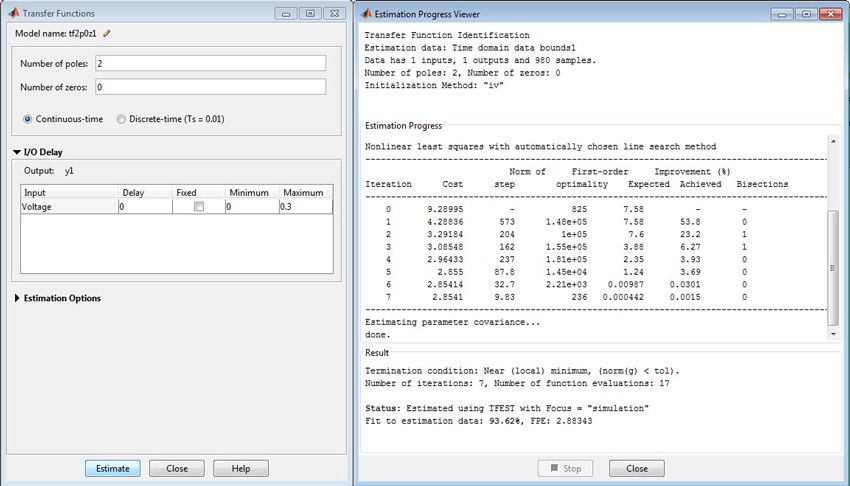 To ensure that the estimated transfer function represents the motor dynamics, we must validate it against an independent data set. For this purpose we select data set 12, where the motor operates linearly as our validation data. We achieve a reasonably accurate fit (Figure 8). 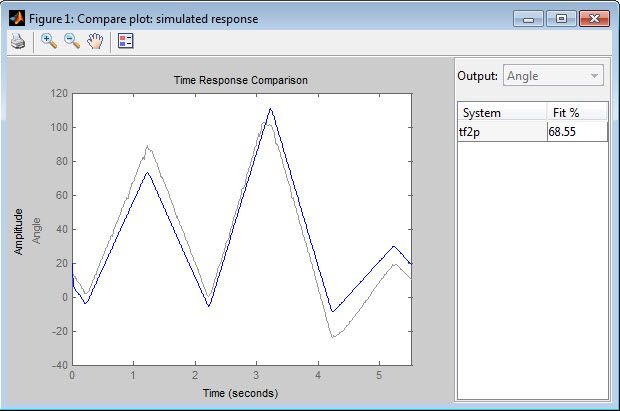 We can also analyze the effect of plant uncertainty. Models obtained with System Identification Toolbox contain information not only about the nominal parameter values but also about parameter uncertainty encapsulated by the parameter covariance matrix. A measure of the reliability of the model, the computed uncertainty is influenced by external disturbances affecting the system, unmodeled dynamics, and the amount of collected data. We can visualize the uncertainty by plotting its effect on the model’s response. For example, we can generate the Bode plot of the estimated transfer function showing 1 standard deviation confidence bound around the nominal response (Figure 9). 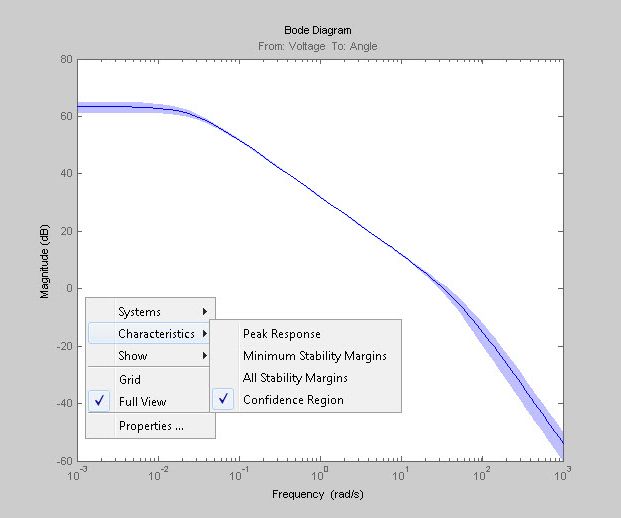 A linear model of the motor dynamics, created by using data collected from a linear region of its operation, is useful for designing an effective controller. However, this plant model cannot capture nonlinear behavior exhibited by the motor. For example, data set 2 shows that the motor’s response saturates at about 100°, and data set 3 shows that the motor is not responsive to small command voltages, perhaps owing to dry friction.

In this step, we will create a higher-fidelity model of the DC motor. To do that, we estimate a nonlinear model for the DC motor. A closer inspection of the data reveals that the change in the slope of the response is not linearly related to the change in voltage. This trend suggests nonlinear, hysteresis-like behavior. Nonlinear ARX (NLARX) models offer considerable flexibility, enabling us to capture such behavior using a rich set of nonlinear functions, such as wavelets and sigmoid networks. Furthermore, these models let us incorporate what we have discovered about the system nonlinearities using custom regressors.

The nonlinear model had various adjustable components. We adjusted the model orders, delays, type of nonlinear function, and the number of units in the nonlinear function. We added regressors that represent saturation and dead-zone behavior. After several iterations, we chose a model structure that employed a sigmoid network with a parallel linear function and used a subset of regressors as its inputs. The parameters of this model were estimated to achieve the best possible simulation results (Figure 10). 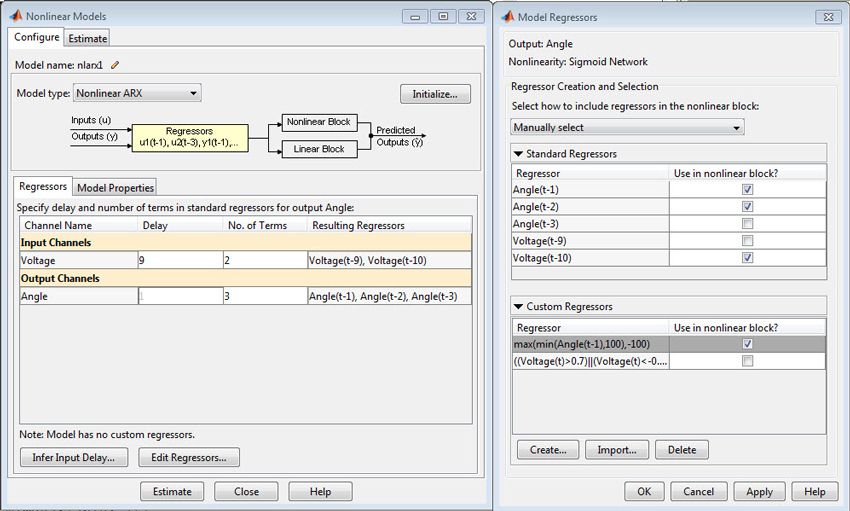 The resulting model has an excellent fit of >90% for the estimation data as well as for the validation data. This model can be used for controller design as well as for analysis and prediction.

We tune the PID controller and then select its parameters (Figure 11). 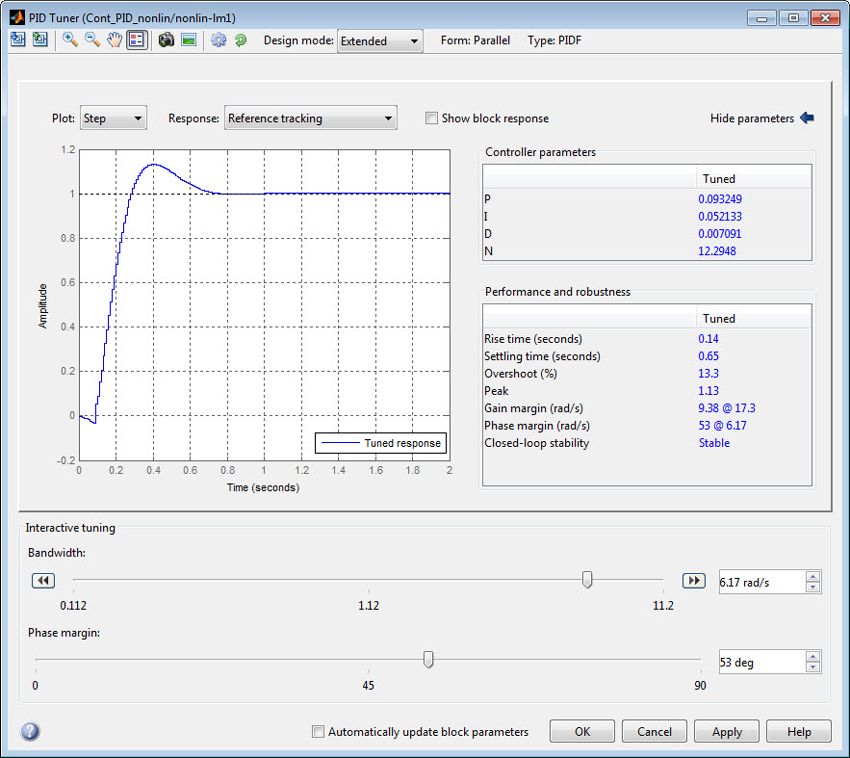 We also check how this controller performs on the nonlinear model. Figure 12 shows the Simulink model that we use to obtain the simulation response of the nonlinear ARX model.

Figure 12. Simulink model for testing the controller on the estimated nonlinear model.

We then compare the linearized and nonlinear model closed-loop step responses for a desired reference position of 60° (Figure 13). 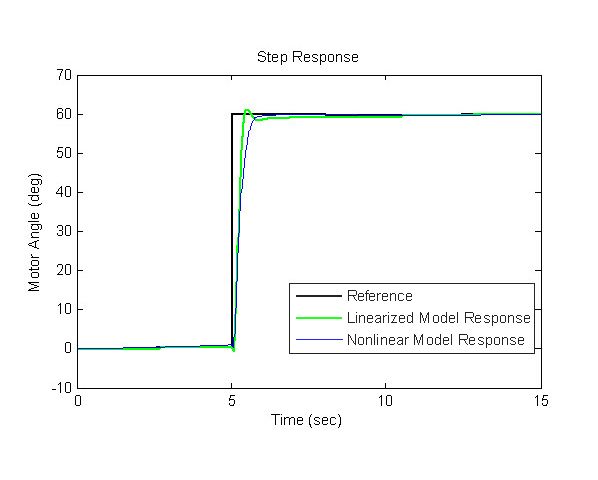 Testing the Controller on Hardware

We create a Simulink model with the controller and place it on the Arduino Uno board using Simulink built-in support for deploying models to target hardware (Figure 14). 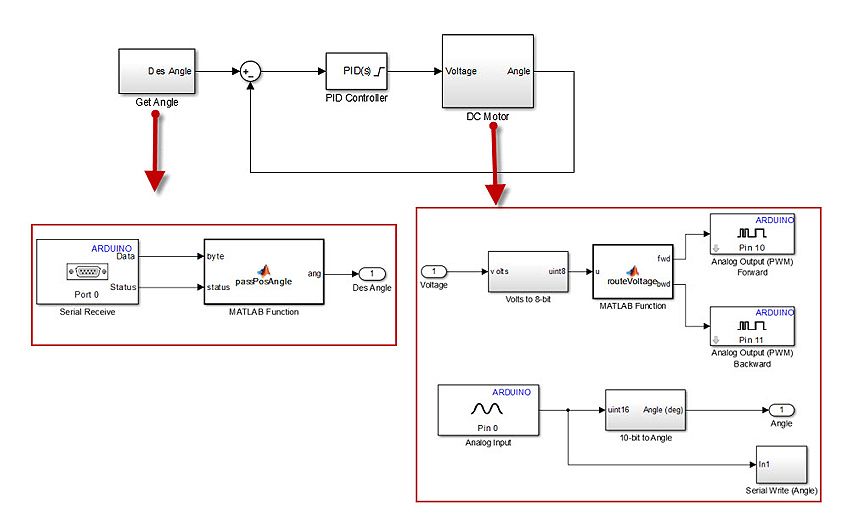 Figure 14. Model with the controller implemented on the Arduino board. The subsystem Get Angle receives the reference signal from the serial port and converts it to the desired angle of the motor. The DC Motor subsystem configures the Arduino board to interface with the physical motor.

We designed a controller by linearizing the estimated nonlinear ARX model about a certain operating point. The results for this controller show that the hardware response is quite close to the simulation results (Figure 15). 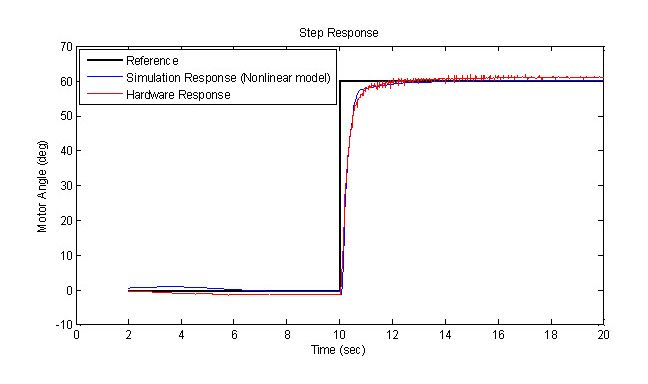 Figure 15. Plot comparing simulation and hardware responses to a step reference for a controller designed using a linearized model.

We also tested how well the controller tracks a random reference command. We see that the hardware tracking performance is also very close to that obtained during simulation (Figure 16). Figure 16. Plot comparing tracking performance in simulation and on hardware for the controller designed using an estimated nonlinear model.

This example, while simple, captures the essential steps for data-driven control. We collected input/output data from a given hardware target and used System Identification Toolbox to construct models of the system. We showed how you can create models of lower and higher fidelity and design controllers using these estimated models. We then verified the performance of our controllers on the actual hardware.