Renault is actively developing next-generation technology for zero-emissions vehicles (ZEVs). At the same time, we are working to make internal combustion engine (ICE) vehicles cleaner and more efficient. One area of focus is the reduction of harmful emissions. ICEs generate oxides of nitrogen (NOX), which contribute to smog, acid rain, and greenhouse gases. To minimize NOX, we need accurate estimates of emissions at different engine operating points—for example, at various combinations of torque and engine speed.

Running tests on a real engine is costly and often time-consuming, and so NOX estimates have traditionally been calculated using lookup tables or combustion models. These methods have several drawbacks. Lookup tables lack accuracy, while combustion models are exceptionally difficult to create due to the complexity of the equations needed to capture emission dynamics. Physical models of NOX are highly complex and difficult to use over the entire operating range of an engine; moreover, they cannot be run in real time on an ECU.

We recently began modeling engine-out NOX (emissions issuing directly from the engine and not from the aftertreatment system) using a long short-term memory (LSTM) network, a type of neural network that excels in learning, processing, and classifying sequential data. The LSTM was much easier to create than a combustion model. Even though we are not specialists in deep learning, using MATLAB® and Deep Learning Toolbox™ we were able to create and train a network that predicts NOX emissions with almost 90% accuracy.

Designing and Training the LSTM Network

We obtained our training data from tests conducted on an actual engine. During these tests, the engine was put through common drive cycles, including the Worldwide harmonized Light vehicles Test Cycles (WLTC) and New European Driving Cycle (NEDC), as well as Real Driving Emissions (RDE) tests. The captured data provided input to the network. It included engine torque, engine speed, coolant temperature, and gear number emissions.

We then created a simple LSTM network using a MATLAB script. Although this initial network only consisted of an LSTM layer, a rectified linear unit (ReLU) layer, a fully connected (FC) layer, and a regression output layer, it performed surprisingly well. We suspected, however, that we could increase its accuracy by adding more layers. We took care not to increase the size of the network to the point where it would cause overfitting or take up too much memory on the ECU.

We updated the MATLAB script to add layers and explored several network configurations. Selection of the best network configuration and architecture was performed manually, since the network size was small. The trial-and-error method enabled us to exploit the physical properties of the system. For instance, for a system with high nonlinearities, we would choose multiple ReLU layers, whereas for a thermal system, multiple LSTM layers would be more appropriate. We settled on a network that had a single LSTM layer, three ReLU layers, three FC layers, and a regression output layer. This version of the LSTM network achieved 85–90% accuracy in predicting NOX levels compared with the 60–70% accuracy that we saw with lookup tables (Figure 1). 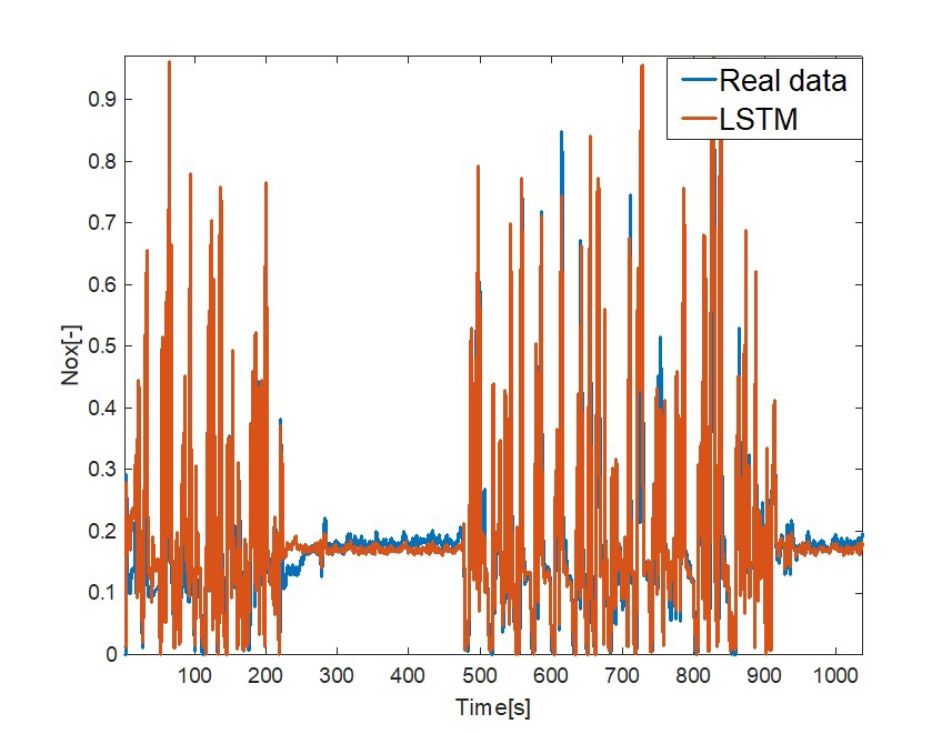 Incorporating the Network into System-Level Simulations

Once we had a trained LSTM network, we made it available to other Renault teams for use in their Simulink® simulations. One team incorporated it into a model that used the engine-out NOX level from the network as input to an aftertreatment system. The team then ran simulations to measure the NOX conversion efficiency of the aftertreatment system at various engine operating points. By introducing LSTMs into system simulations, the team acquired information not easily accessed with physical or empirical models. Renault teams are also using the LSTM neural network in simulations to evaluate the performance of onboard diagnostics (OBD) systems and to assess engine emissions for new drive cycles.

Our successful implementation of an LSTM network for predicting NOX emissions levels has led to several follow-on projects at Renault. In one project, we used a tool built for us by MathWorks consultants to generate C code from the LSTM network as a proof-of-concept demonstration. Generating code in this way will enable us to deploy the NOX emissions estimator on an ECU. As part of a simulation platform dedicated to the OBD system, the LSTM will enable on-the-fly, round-the clock detection of unhealthy or faulty conditions, as mandated by emission standards.

When embedded into ECUs, deep neural networks—in particular, deep LSTMs—can present a challenge. Our ECUs are not very powerful computers, which means we need to trade off the complexity of the LSTM (and hence, the quality of the prediction) against the ECU’s capacity to run the calculations. For our applications, the networks were relatively small, and could be easily integrated into Kalman filters if needed.

More recently, we’ve extended our use of deep learning with MATLAB. For this effort, we are using reinforcement learning to develop strategies for air path control in Renault engines.