I would like you to see the big picture of linear algebra. We're not doing, in this set of videos, a full course on linear algebra. That's already on OpenCourseWare 1806. And now I'm concentrating on differential equations, but you got to see linear algebra this way.

And this way means subspaces. And there are four of them in the big picture. And we-- previous video described the column space and the null space. Now, we've got two more, making four. And let me look at this matrix-- it's for subspaces-- and put them into the big picture.

Now, if I take all their combinations, do you visualize that if I have two vectors, and I add them, and I get another vector that's in the same plane? Or if I subtract them, I'm still in that plane. Or if I take five of one and three of another, I'm still in that plane. And I fill the plane when I take all the combinations. So the row space-- can I try to draw a picture here?

It's a plane. This is the row space. I'll just put row. And in that plane are the vectors 1, 2, 3 and the vectors 4, 5, 6, those two rows. And the plane fills our combinations. Well, I can't draw am infinite plane on this MIT blackboard. But you get the idea. It's a plane. And we're sitting in three dimensions.

Now, the other-- so there's more. We've only got one-- a plane here, a flat part, like a tabletop, extending to infinity, but not filling 3D because we've got another direction. And in that other direction is the null space. That's the nice thing.

So I would like to know the null space of that matrix. I'd like to solve so the null space, N of A-- I'm solving Av equals all 0s. So some combination of those three columns will give me the 0 column. Let me write it in as a 0 column.

So the null space in my picture-- here is the null space. Well, it is not very thick is it because it's just a line. So I'll call this N of A, this line. Well, you see I'm trying to draw a three dimensional space. That line goes both ways. But it's perpendicular to the plane. That's the fabulous part. That's wonderful.

So this is a right angle here. It's a right angle, 90 degrees between those two subspaces. And again, in this example, one space is two dimensional, a plane. The other space is one dimensional, a perpendicular line. I can show with my hands, but I can't draw on this flat blackboard. I have the plane going infinitely far, and I have the line going perpendicular to it and meeting, of course, at 0-- at the 0 vector.

That solves Av equals 0, and it also-- it's a combination, a 0 combination of the rows. That's half of the big picture, the row space and the null space.

Now, what about-- what's the name for the row space? Well, if I transpose the matrix, the row space turns into the column space. Transpose rows into columns of the matrix A transpose. So by transposing a matrix, it turns these two rows into two columns. And that's what I have here.

The row space is the-- this is the column space of the transpose matrix. I like it. I don't want to introduce a new letter for the row space. I like having just column space and null space. So I-- and I'm OK to go to A transpose. Now, what's that fourth guy?

Well, now I've got, for this null space-- because my matrix here is 2 by 3, for this fourth subspace, I have three equations and only two unknowns, w1 and w2. And, in fact, the only solutions are w1 equals 0, w2 equals 0, because that's the only way I can get combination-- that's the only combination of that vector and that vector that gives me 0 is to take 0 of that and zero of that.

All of two dimensional space was the column space, and that didn't leave any room for the left null space, the null space of A transpose. So do you see that picture? Let we may be just sketch it once more with a clean board.

So this row space, in that example, was two dimensional. It was a plane. In general, the dimension equals-- let's say R. That's an important number, the rank of A. Oh, that's a key number. Maybe, I better speak separately about the rank of a matrix. But I'll complete the idea here.

And this has dimension M minus R because, together, they have dimension M. That's the picture with the dimensions put in. And let me say a little more about the idea of dimension in a separate video. Thank you. 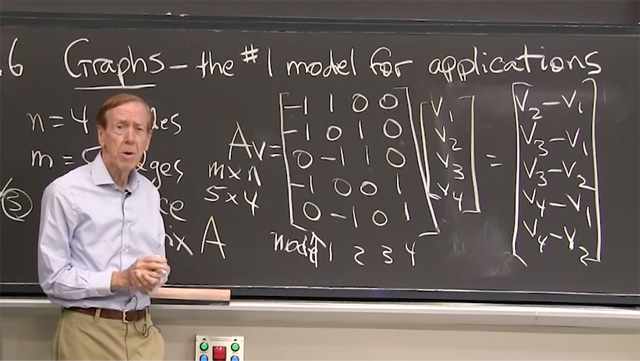