Capturing Semitrucks’ Exhaust at the Source

Most of what you see around your home was on a semitrailer truck at some point. Two million of them roam the roads in the United States. They keep the economy running, but not cleanly. In a given year, they produce roughly 340 million tons of carbon dioxide—5% of the country’s total carbon output—challenging efforts to make infrastructure greener. A new company called Remora has an answer to that challenge.

The answer, you may be surprised to learn, is not electrification.

“While batteries serve consumer cars well, they don’t work for 18-wheelers for several reasons,” says Paul Gross, co-founder and co-CEO at Remora. “Batteries are heavy, and a stack big enough to power a large truck would cut deeply into the amount of freight it can carry. They also provide limited range and charge slowly—a costly inconvenience for vehicles that spend much of the day in transit.” 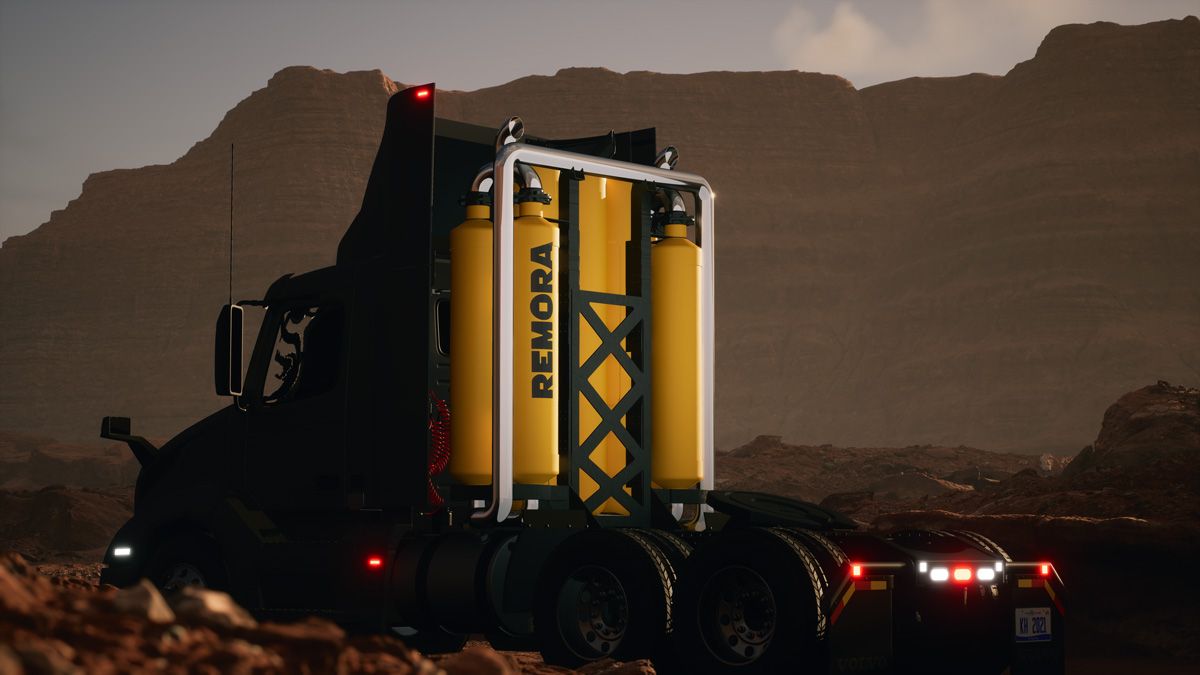 Remora’s solution instead relies on carbon capture. Some startups are developing methods to pull carbon from the atmosphere using big fans and filters. A more efficient approach, however, may be to capture carbon at its source. Remora plans to install hardware on tractors—the part of the truck that pulls the trailer—to suck exhaust from the tailpipe and exhale something more eco-friendly. To make that approach feasible, Remora has had to solve a set of economic and technical puzzles. There’s a reason that people thought for years that mobile carbon capture was impossible.

In 2020, Gross was a senior at Yale studying data science when he wondered why no one was doing mobile carbon capture. After some digging, he came across a 2019 environmental engineering dissertation titled “Decarbonizing Freight Transport,” written by Dr. Christina Reynolds at the University of Michigan. She had evaluated different substances for their ability to absorb carbon and proposed ways to improve their performance in realistic trucking conditions. Further, her economic models suggested that mobile carbon capture could be cost-effective.

Gross saw a path to a startup. Many companies that rely on shipping, such as Walmart, were making pledges to cut carbon emissions with no realistic way to do so. Gross reached out to Reynolds, who was then at the Environment Protection Agency furthering her work and enticed her to join him. They teamed up with a third co-founder, Eric Harding, who had a background in truck mechanics, and created the company.

The business plan is to sell the hardware to trucking companies, who will install it on existing fleets. Every 500 miles or so, the trucks will offload their stored carbon dioxide into Remora tanks at truck stops or gas stations, a process that should take about 15 minutes. Remora will sell this CO2 to other companies to use, for example, in concrete or wastewater treatment. The worldwide market for CO2 is about $8 billion. Remora will then share the revenue with the trucking companies. After a few years, the hardware pays for itself.

“For us, the biggest challenge is getting people to understand the benefit and cost of low-emissions vehicles versus thinking electric vehicles are going to save us all.” 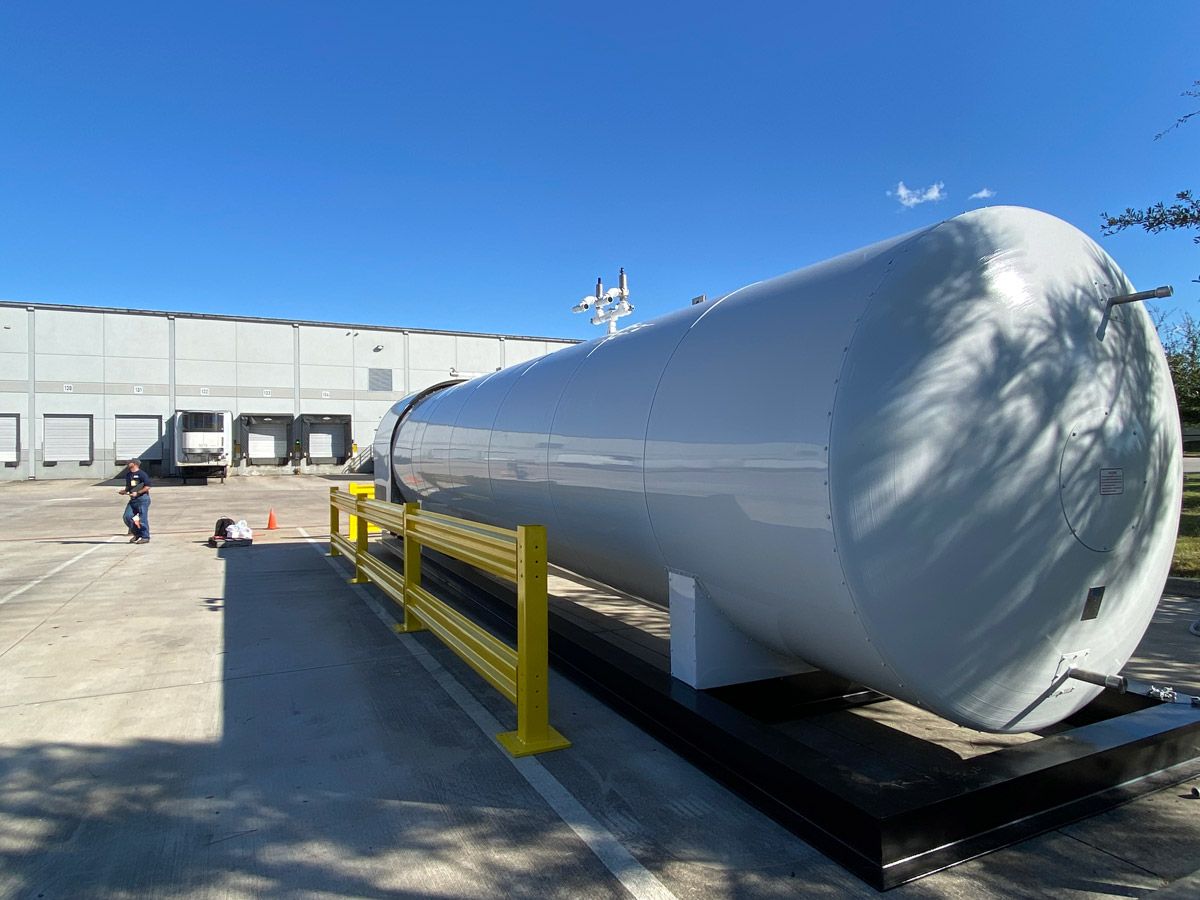 Eventually, the devices could work on trucks that use not diesel, but biofuel created by capturing carbon from the atmosphere, thereby making the overall process even better than going carbon neutral. And Remora could scale the devices up. Other companies are working on carbon capture for factories and ships and might eventually scale down to trucks. Meanwhile, Remora might meet them in the middle, adapting tech for trains and then cargo ships.

“For us, the biggest challenge is getting people to understand the benefit and cost of low-emissions vehicles versus thinking electric vehicles are going to save us all,” Harding says. “Getting our first prototype out there will help people see the value of what we’re bringing.”

That’s not to underplay the technical challenges. Remora’s current design is a large box and a set of tanks that together stick out about 3 feet from the back of the tractor’s cab. The exhaust enters a set of systems that condition the exhaust. It then enters a chamber containing beads of a mineral called zeolite, whose pores absorb the CO2 as the rest of the exhaust passes through. Zeolite filters are well-established; submarines and spaceships use them to recycle air for passengers to breathe.

When the zeolite can hold no more CO2, energy captured from the exhaust and the engine warms it, expanding its pores and releasing the CO2, which the system then stores in a tank. As this zeolite chamber releases CO2, another one takes over and absorbs more from the exhaust. The two take turns.

“Carbon capture has been around for a while,” Harding says, “but when you make a carbon-capture system on a vehicle, it’s so incredibly different. You basically have to reinvent every single part of that system.” The parts available from manufacturers were not made to be lightweight, withstand vibration, or work with the required voltages and communication protocols. Harding’s team had to disassemble them and rebuild them, becoming experts in every subsystem.

“Before Remora started, the most similar things were carbon captures for industrial buildings. Nobody has done anything this repeatable.” 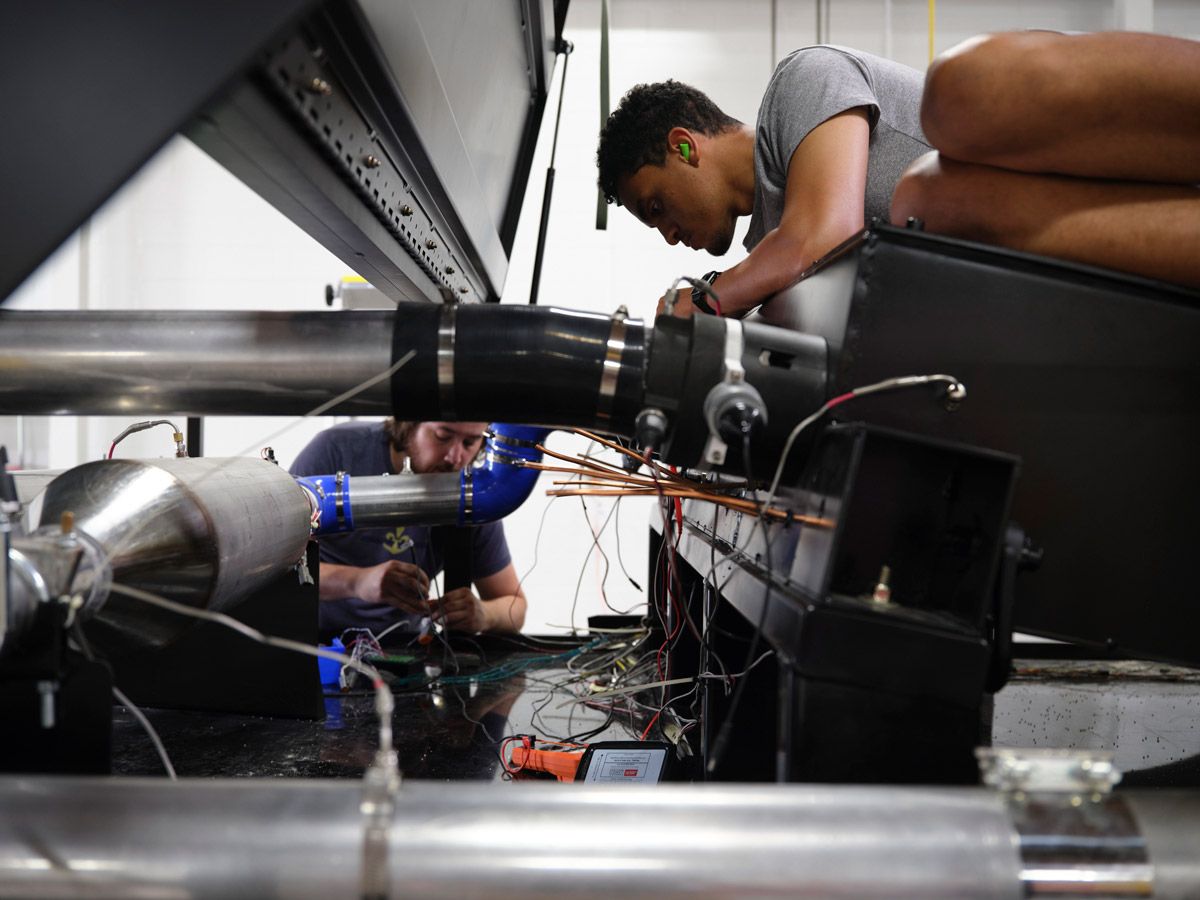 Two of the most important components are the compressors and the vacuum pumps. “Manufacturers did not think that we could install them on trucks and make them work together as a pair,” Harding says. “So, the fact that we’re doing this now and showing them that it’s working, it’s pretty unbelievable.” The manufacturers have since come around, offering to build the components however Remora wants.

“Before Remora started, the most similar things were carbon captures for industrial buildings,” Harding says. But those systems had plenty of energy, no weight limits, and no volume constraints. Further, buildings differ in size, footprint, and steam temperatures: Each has unique needs. Not many people were trying to build a standardized system that could be installed in many places. “Nobody has done anything this repeatable.”

As the Remora team refines the hardware, they’ll improve its performance. Currently it captures 60–80% of the CO2. It weighs 2.5 tons empty, 4 tons full. It needs emptying after 500 miles. And it reduces fuel efficiency by about 10% because of the added weight and the energy needed to heat the zeolite. The goal is for it to remove 95% of the CO2 while significantly reducing energy consumption and weight. Harding thinks they can get there soon.

What makes the components work together is not just adjustments to the hardware, but clever algorithms. Consider just one step of the process, such as getting CO2 from the zeolite to the CO2 tank. Software controls a vacuum pump that helps suck CO2 out of the pores of the zeolite beads and the compressor that helps store it. “There’s no way to predict when the CO2 is going to be released,” Harding says. “The capture dynamics are very complicated, such as how deep the CO2 molecule is in the pore and how quickly we’ve heated it. Different zeolite beads are experiencing different heat profiles. So, you’re getting this really chaotic release of CO2. And it takes so much work to get that CO2 out and then compressed without damaging any of our components.” Smart software is crucial, Harding says. “It would be impossible for a human to dial these knobs.”

“MATLAB has obviously been the right tool for us because it’s gotten us to places people who specialize in these components did not think we could get to.”

The control algorithms also make the system tap the truck’s engine for energy, condition the exhaust, absorb the CO2, and switch between zeolite chambers. “We are doing all of this onboard a Class 8 truck,” says Chisom Emegoakor, controls engineer at Remora. Currently, the control system uses 120 data inputs and 70 outputs. “We are still in a prototype stage,” he says. “This means we’re using a lot of sensors. We monitor everything.”

One lesson Emegoakor has learned: Designing supervisory controls for Remora’s system necessitates acquiring data from many control modules on the truck. “Controller decisions are made based on data received from the engine control module, after-treatment control module, common powertrain controller, and transmission control unit.”

To design their carbon-capture system, the controls team created a software simulation in Simulink® of the hardware. The simulation is informed by data they recorded from 26 customers’ engines as the customers drove their trucks around. They sometimes pair their simulation with an engine simulation built in software called GT-POWER, by Gamma Technologies. The team also bought a truck that they run on a vehicle dynamometer, which is basically a treadmill that applies resistance to the spinning wheels and measures the truck’s response. And they use an engine dynamometer that does the same thing to a standalone engine. For the most realistic data, they hire local truck drivers to drive around in a truck with a prototype carbon-capture device installed.

They’re using Stateflow® to optimize parameters such as the timing of the switch between zeolite chambers. If they don’t get it right and both chambers are releasing CO2, they might have to bypass the whole system and send exhaust into the atmosphere. To reduce inefficiencies, they’re looking at how long each step takes in various atmospheric and driving conditions, such as a hot versus cold day and a full versus empty trailer. “There are just so many variables that can change how the engine is performing,” Harding says.

Eventually, Harding’s team plans to use machine learning to optimize some of the control parameters, but they need more data before they can train a machine learning algorithm. They’re still working on their first iteration, Harding says. “Definitely in the pipeline, though.”

Harding says the choice to use MATLAB® was easy, in part, because of his familiarity with the software. Emegoakor likes the ease of programming graphically in Simulink by dragging connected functions around. “We test different configurations every day, but it might literally just be moving a single block,” he says. “If you have to do this in written code, you might have to alter lots of lines just to make a simple change.” The team can then generate C++ from their algorithms with Embedded Coder®. After verifying for issues such as run-time errors using Polyspace®, the code is then deployed onto a controller in the carbon-capture device.

Crucially, MATLAB enables collaboration between different teams, particularly the mechanical and software engineers. “The funny thing is, when a mechanical engineer is thinking about how to write software, we’re approaching it from the physical parameters,” Harding says. “For us, it’ll be a lot of moving components. And that’s where Simulink excels.” It makes it easy to design controls that execute physical dynamics. “And that lets Chisom hand it off. Someone else can make it run smoothly on the controller. It becomes basically the tool that merges the two mindsets.”

The proof is in what they’ve achieved so far with a small team and not much time. Emegoakor has been with them for barely a year. “MATLAB has obviously been the right tool for us,” Harding says, “because it’s gotten us, literally, to places people who specialize in these components did not think we could get to.”