Energy Storage for a Renewable-Powered World

Energy storage systems can absorb excess energy produced by wind and solar, saving it for times of low production.

Fossil fuels have one significant advantage over renewable energy sources such as wind and solar power: They don’t depend on the weather. But this advantage is waning thanks to advancements in energy storage. Energy storage systems can absorb excess energy produced by wind and solar, saving it for times of low production.

In the transition to renewable energy and variable energy sources such as wind and solar, engineers have long been working on storage technology. For decades, hydropower has been the primary energy storage method globally. In the U.S., it accounts for 95% of the utility-scale energy storage capacity. But hydropower facilities are subject to a lengthy permitting process, take several years to build, and have specific location requirements.

Energy storage captures energy produced by renewable resources such as hydropower, wind, and solar to fuel cars, homes, and industry.

Lithium-ion batteries are another major energy storage solution. They can operate at the grid scale, like hydropower, or fuel smaller energy demands, such as businesses, homes, and electric vehicles.

Lithium-ion batteries and hydropower alone won’t be enough to transition the grid to 100% renewable power. But energy can be stored through other methods, like in eco-friendly batteries, in a flywheel’s kinetic energy, or as thermal energy in molten salt.

In Quaqtaq, an Inuit community in northern Québec, EVLO Energy Storage Inc. is testing how its systems can bring renewable energy into the grid and serve remote areas. For the past three years, EVLO’s energy storage systems have helped the Quaqtaq community integrate solar power.

“When the distribution grid goes out for a planned or unplanned event, the microgrid that we have there will be self-sustainable and provide continuity of electricity.” 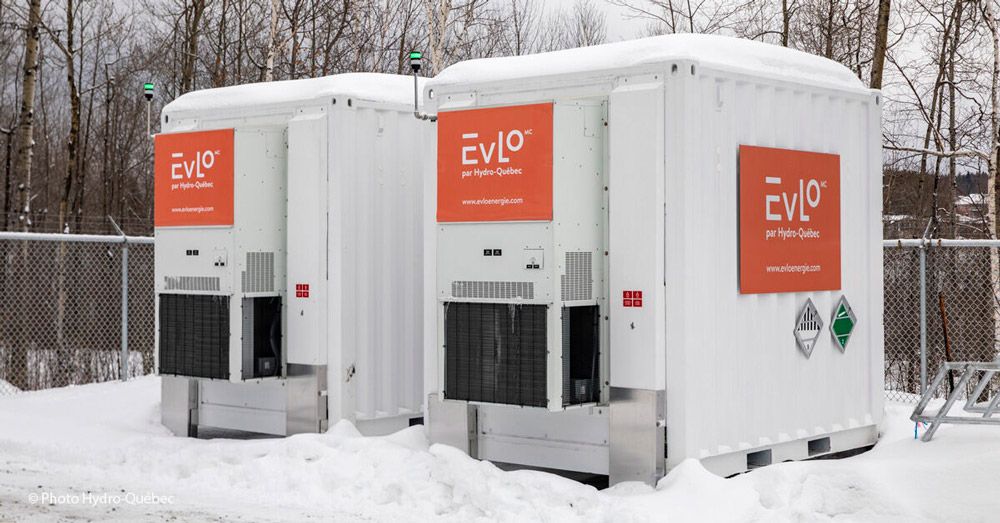 Hydro-Québec has been developing the technology behind the EVLO systems for the past 40 years. Its smaller systems can power commercial buildings, while the larger, ruggedized units can power grids and industrial sites. The lithium iron phosphate battery ranks among the most efficient batteries on the market today. Unlike other battery types, it has a depth of discharge of 100%, meaning users can access all the energy stored in the battery.

Adile Ajaja, the software team lead at EVLO, and his team use MATLAB® and Simulink® to develop and model the EVLO systems. They then use code generated from their Simulink models in their hardware to control the system.

Since its first project, EVLO has brought its solution to other communities. In the town of Lac-Mégantic, the company recently installed an energy storage system to service a neighborhood microgrid. The first microgrid in Québec was part of the recovery effort after a runaway train destroyed much of the downtown area a few years ago.

EVLO stepped in as part of that project to increase the resiliency of the electric grid. The systems store the energy from 1,700 solar panels, servicing 40 buildings in the city center, electric vehicle charging stations, and automation controls for more efficient energy management. The microgrid and energy storage systems also provide a power source if the main grid goes out. “When the distribution grid goes out for a planned or unplanned event, the microgrid that we have there will be self-sustainable and provide continuity of electricity,” says Ajaja.

The Finland-based startup Teraloop has put a new spin on old energy storage technology. That technology, a flywheel, stores energy in a rapidly spinning rotor. But unlike most flywheels, Teraloop’s solution has a hollow center. “Think of a tire but without the rim,” says James Hagerman, chief technical advisor at Teraloop. “Most flywheels are solid, with a hub.” Further improving on the traditional flywheel, Teraloop harnesses magnetic forces to levitate the flywheel’s rotor, enabling nearly frictionless rotation.

“As long as you need high power for a short duration, like the acceleration of a subway … a flywheel can outperform batteries.”

The company plans to use their flywheel to accompany battery storage at electric vehicle (EV) charging stations, for regenerative braking in subway and tram systems, and to stabilize microgrid voltage fluctuations.

At EV charging stations, flywheels speed up vehicle charging and extend battery life. The batteries store energy from the grid for EV charging, but they’re an imperfect solution. “Today’s batteries are lithium-ion and are not made to complete a lot of cycles every day. Their life goes down dramatically,” says Hagerman. “So, you do what’s called hybrid energy storage, which is the flywheel plus the battery.”

The hybrid storage model is good for the battery. “It protects the battery and allows the energy station to have a minimal grid connection,” he says. That means that incorporating charging stations won’t require grid upgrades, at least not while EVs are in the minority of vehicles on the road.

As a standalone system, the flywheel can provide energy for public transportation systems. Regenerative braking technologies—which reverse the rotation of a motor while braking to charge an electric vehicle—are used in metros and trams but with limited storage capacity. “As long as you need high power for a short duration, like the acceleration of a subway … a flywheel can outperform batteries,” says Hagerman. 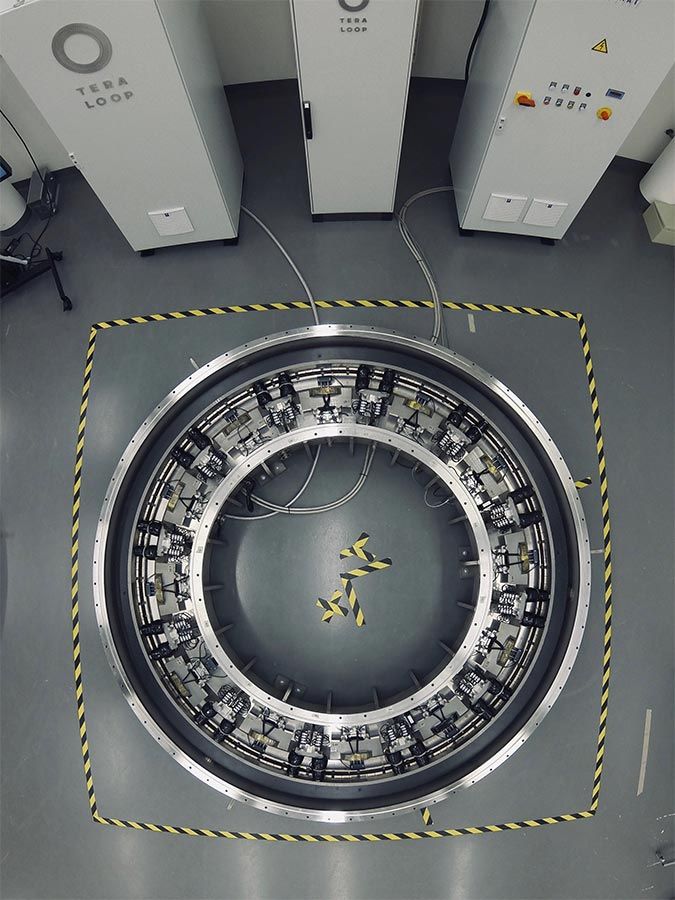 Off the road, flywheels can stabilize microgrids powered by intermittent, renewable sources. “The voltage fluctuates, the frequency fluctuates, so they need to have grid support,” says Hagerman. “That is where electricity suppliers use batteries for the longer term,” he said, but flywheels supplement batteries, providing bursts of energy for short periods.

“We’re not in competition with batteries, but there may be occasions where flywheel by itself might be a better option, especially when space is limited,” says Hagerman. But he also shows them how the flywheel can improve battery-powered systems. “They complement each other.”

Alphabet Inc. subsidiary X brands itself as a group of inventors and entrepreneurs who create technologies that solve some of the world’s most challenging problems. In that spirit, they supported a budding energy storage project called Malta that stores energy in salt and cold liquid. The Malta project team designed their pumped-heat energy storage system to eventually connect to the grid and stabilize the energy supply.

“We don’t want the [energy storage] system just in the U.S. or developed countries. We want to be able to build it anywhere.”

Pravallika Vinnakota, lead engineer for modeling and simulation at Malta

Malta Inc., based in Cambridge, Massachusetts, became its own company in 2018 and refined its design for a power plant. “This will provide increased grid reliability and flexibility,” says Pravallika Vinnakota, lead engineer for modeling and simulation at Malta Inc.

When connected to an electricity source—the grid, wind, solar, or fossil fuel sources—the system’s heat pump converts the electrical energy into thermal energy, creating a temperature difference. “It stores electricity as heat in very high-temperature molten salt and as cold in low-temperature coolant,” says Vinnakota. The hot salt and cold coolant are stored in separate tanks, storing 10 hours’ worth of energy for several days.

Then, when power is needed, a heat engine converts the thermal energy back into electrical energy for distribution. Based on power demands, an algorithm governs both when the system takes energy from the grid and when it distributes it. This cycle can repeat itself thousands of times: Malta estimates that the system can last for more than 25 years without major performance degradation.

But the system is still being engineered and in the design phase of development. For now, the Malta team works in simulations. Importing a model of their system into Simulink, the Malta team designs the system controls and figures out how to operate their system. “Our goal is to build a plant in the coming years. Because we don’t have a plant now, the best thing we can do is build simulation models and run a bunch of tests on it,” says Vinnakota. “We’re also using Model-Based Design to determine the plant specifications based on the information that we gather from our simulations.”

Once Malta is ready to build a physical plant, they won’t be constrained by geography. Says Vinnakota: “It doesn’t need to be next to a mountain like energy systems storing potential energy,” such as pumped-storage hydropower. The system also uses readily available materials, like salt and steel. “We don’t want the system just in the U.S. or developed countries. We want to be able to build it anywhere.”

A Bridge to a Renewable Grid

As the costs of renewable energy sources decline and the need to replace fossil fuels becomes increasingly urgent, energy storage will become an essential tool. But different storage needs demand different tools, ranging from batteries to flywheels to salt tanks. Companies are exploring each of these technologies to shore up electric grid resilience and facilitate a smooth transition to clean power.

Building the Future of Clean Technology Through Community