Differential Equations and Linear Algebra, 3.3b: Linearization of y'=f(y,z) and z'=g(y,z)

With two equations, a critical point has f(Y,Z) = 0 and g(Y,Z) = 0. Near those constant solutions, the two linearized equations use the 2 by 2 matrix of partial derivatives of f and g.

We have two equations, f equals 0, and g equals 0, two equations. But we have two unknowns, y and z. So we expect some solutions. And each solution has to be looked at separately. Each solution is a critical point. It's like well, you could think of a golf course, with a surface going up. So critical points will be points where the maximum point maybe, or the minimum point, or we'll see something called a saddle point.

Actually, let's do the example. The example is a famous one. Predator-prey it's known as. Predator like foxes, prey like rabbits. So the foxes eat the rabbits. And the question is, what are the steady states where foxes' and rabbits' constant values could stay?

And what about the foxes, the predator? The predator increases. So this is from encountering the rabbits. That tends to make the number of predators increase. But if there were no rabbits, the foxes don't eat grass. They're out of luck, and they decay. So I see a minus z there. So you see the pattern?

This is one. If y and z are both 0, then certainly I would get 0's. So that's like starting with a very small number of foxes and rabbits. Or if y is 1 and z equal 1, do you see that that would be, they would be in perfect balance? If y is 1, and z is 1, then that's 0 and that's 0. So the equation is satisfied. We can stay at-- y can stay at 1, and z can stay at 1. It's a steady state. And the question is, is that steady state where rabbits are staying-- their population is staying at 1, because they're eating grass, good. But they're getting eaten by the foxes, bad. And those two balance, and give a rate of change of zero.

And the foxes similarly, the foxes get a positive push from eating rabbits. But natural causes cut them back. And they balance at z equal to 1.

So here is the idea of linearize. So I'm linearizing. So my first function is whatever its value is at this point, it's like a tangent line. But now I've got two derivatives. Because the function depends on two variables. So I have a y minus capital Y, times now I have to do partial derivative. So that's the slope in the y direction, multiplied by the movement.

And then similar term, z minus capital Z times the movement in the z direction. And I have to, because I stopped, this is the linear part of the function. I have to put an approximate symbol. Because I've ignored higher derivatives. And of course this is 0. So that's why we have linear in y and linear in z, times some numbers, the slopes.

But we have two more slopes. Because we have another function g of y and z. And that again will just be approximately g at the critical point, which is 0 plus y minus capital Y, times dg dy plus z minus capital Z times dg dz. So altogether, the linear stuff and four numbers, the derivatives of f in the y and z directions, the derivatives of g in the y and the z directions. OK.

So here is in the example. So can I create a little matrix, df dy? It's the nice way, if I've got four things, 2 by 2 matrix is great. df, dz; that number, dg, dy; and dg dz. You could say this is the first derivative matrix. It's the matrix of first derivatives and it's always named after Jacobi who studied these first. So it's called the Jacobian matrix. Maybe I'll put his name to give him credit, Jacobi.

And the matrix is the Jacobian matrix. And its determinant is important. It's a very important matrix, important in economics. We're doing things-- I'm speaking here about predator-prey, little animals running around. But serious stuff is the economy. Is the economy stable? If it's a running along at some steady state and we move it a little bit, does it return to that steady state, or does it get totally out of hand?

So then my approximate-- what's my linearized equation? My linearized equation is the time derivative of y and z. So this left-hand side is just dy dt, and dz dt. So I'm using vector notations, putting y and z together, instead of separately, no big deal.

So then I have this matrix J, this 2 by 2 matrix, times you notice here is a y minus capital Y and a z minus capital Z. There is the linearized problem. Linearized because this is constant, and this is linear, single y, single z, and we have a matrix J.

Rabbits are growing. It's an unstable point. We're leaving at 0, 0. Rabbits are increasing. Now how about the second point? The second point was when they were both 1. when they're both 1, then we got this as the Jacobian matrix. Oh, this is the interesting one. Can I just stay with this one to finish? So I'm interested in the-- and I'll put these facts on a new board.

So again, y prime dy dt is y minus yz. z prime is yz, rabbits are getting eaten, minus z. And I'm interested in the point y equal 1, z equal 1. And my matrix of this is the Jacobian matrix. The Jacobian matrix had the derivatives, which were 1 minus z, minus y. The y derivative of that is z. The z derivative is y minus 1. And at this point y and z are 1. So that became 0, minus 1, 1 and 0.

And what kind of a problem do I have here? So my linearized equation, so linearized, linearized around the point 1,1. My equation is y minus 1 prime, sorry. It's the distance to the critical points. the derivative of y minus 1 is, I see here a minus 1. I see a minus z minus 1. And here a plus y minus 1.

So this is the-- right in the center there, that would be the point where y is 1 and z equal 1, the critical point. And if I start out with some extra rabbits, then the number of rabbits will drop. Because foxes are eating them. The number of foxes will increase. I'll go up. So there I have a little bit later, I have foxes now, but no rabbits to eat. So the foxes start dropping, and what happens?

I think, yeah. The number of rabbit starts increasing. And this is what happens. I'll go around and around in a circle. If you remember the pictures of the paths for 2 by 2 equations, there were saddle points. That's what this is. y equals 0, z equals 0 was a saddle point. So no, it's a saddle.

And what I'm discovering now for y equal 1 is an oscillation between foxes and rabbits. So again, I could say it'll be our center that was the very special picture where it didn't spiral out. It didn't spiral in. The special numbers, the eigenvalues of that matrix are-- well, better leave eigenvalues for the future. Because they happen to be i and minus i here.

So this is a center. Now what about-- do I call a center stable? Not quite, because the rabbits and foxes don't approach 1. They stay on a circle around 1. Either I've got extra rabbits or extra foxes. But the total energy or the total stays a constant on that circle. And I would call that neutrally neutral. Neutral stability, because it doesn't blow up. I don't leave the area around. I stay close to the critical point. But I don't approach it either.

OK. So that's a case where we could see the stability, based on the linearization. OK. One more example to come in another lecture. Thanks. 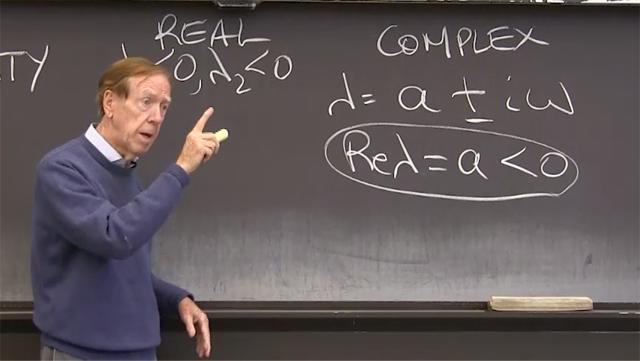