“The algorithms we developed using MATLAB gave the participant back basic control of his arm and hand. By the end of the study, he could grip a bottle, pour out its contents, and set it down, as well as pick up a stir stick and execute a stirring motion.” 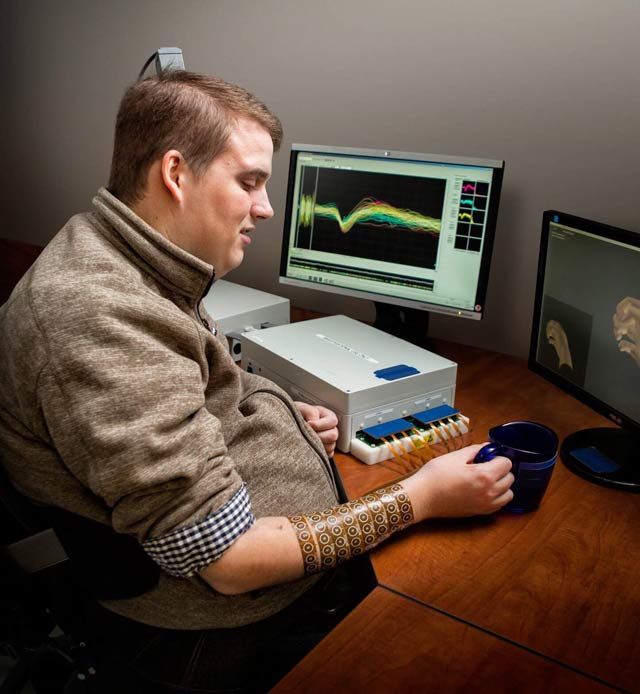 When disease or injury disrupts the neural pathways connecting the brain’s motor cortex to muscles, the result is often permanent paralysis. A team of engineers, scientists, and statisticians at Battelle have developed a technology that bypasses damaged neural pathways. Known as Battelle NeuroLife™, the system is the first ever to successfully restore muscle control using intracortically recorded neural signals in a human. It has enabled a quadriplegic man to regain control of his right forearm, hand, and fingers.

NeuroLife includes signal processing and machine learning algorithms developed in MATLAB®. These algorithms process and interpret signals from a microelectrode array implanted in the study participant’s brain. When the participant thinks of a specific hand movement, the algorithms decode the resultant brain signals, identify the intended movement, and generate signals that stimulate the patient’s arm to perform the movement.

To translate this data into specific hand movements, Battelle engineers needed to extract meaningful features, apply classification algorithms to identify patterns in those features, and map the patterns to the participant’s intended hand movements. The engineers then needed to control 130 channels of a neuromuscular electrical stimulator (NMES) sleeve on the participant’s right arm. Even a seconds-long delay between thought and movement would have made the movement too unnatural, rendering the entire system impractical. As a result, all data processing, classification, and decoding had to be done in real time. To achieve performance approaching natural motion, the system had to update 10 times per second, which meant completing all processing steps in less than 100 milliseconds.

Working in MATLAB, the team developed algorithms to analyze data from the 96 channels in the implanted electrode array. Using Wavelet Toolbox™, they performed wavelet decomposition to isolate the frequency ranges of the brain signals that govern movement.

They performed transforms on the results of the decomposition in MATLAB to calculate mean wavelet power (MWP), reducing the 3000 features captured during each 100 millisecond window for a single channel to a single value.

The resulting 96 MWP values were used as feature vectors for machine learning algorithms that translate the features into individual movements.

During testing sessions, the team trained the SVM by having the participant attempt the movements shown in the videos. They used the trained SVM’s output to animate a computer-generated virtual hand that the participant could manipulate on screen. The same SVM output was scaled and used to control the 130 channels of the NMES sleeve.

While the participant moved his arm and hand to perform simple movements, all signal processing, decoding, and machine learning algorithms were run in MATLAB in real time on a desktop computer.

Battelle engineers are currently using MATLAB to develop algorithms for the second- generation NeuroLife system, which will incorporate accelerometers and other sensors to enable the control algorithms to monitor the position of the arm and detect fatigue.