adding a communication delay in simulink

in MATLAB. I am trying to recreate the results in simulink. I used a LTI block to write down

in a block, then I simulated the system. Without the delay, I get matching results (with the MATLAB code and simulink) but not with the delay. Is there another way to add the delay?

⋮
I did use the LTI block ( I mentioned in my question). It did not give the same results as in MATLAB code. I am trying to replicate the results and I am a bit stuck due to this.

⋮
I tried the LTI block with a very simple LTI model including a delay and Simuink produced the same output as Matlab. Perhaps there's some mismatch between the Simulink solver settings and the model dynamics. Or maybe something else. Hard to say any more w/o more information.

⋮
After the running of simulink model, I linearize it with the model linearizer to get the settling time. The settling time is different.The output graph has a slight overshoot. You mentioned a mismatch between the Simulink solver settings and the model dynamics. How can I check or correct the mismatch?
P.S- I am also using a PD controller in this system

⋮
I agree that this does work but if I have the diagram as shown below: 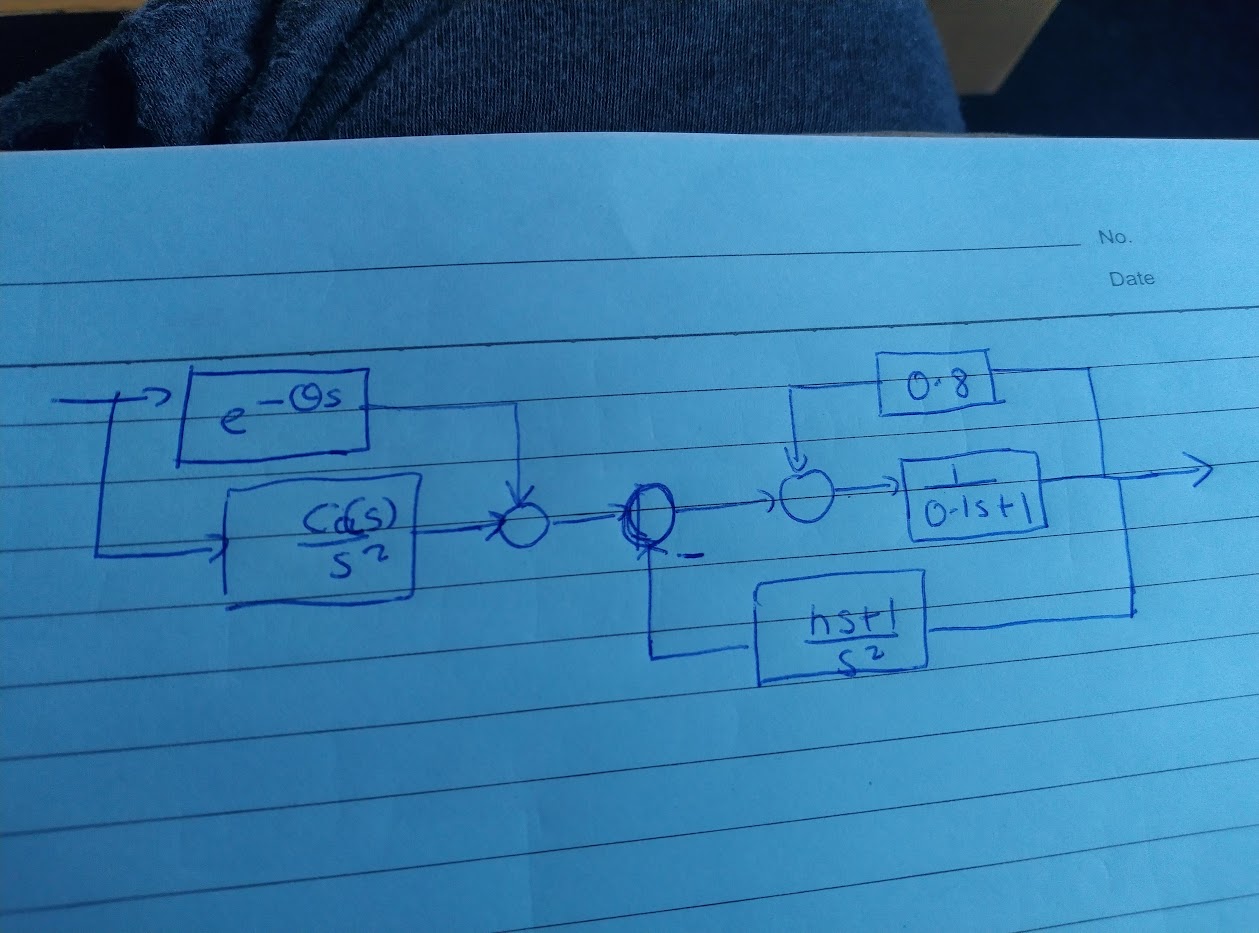 Then this diagram which gives the same tf when made in simulink gives a different answer. I get a difference in the output (the graph has an overshoot). I also get a different settling time. I simulated for delay of 0.02 seconds.
P.S. Sorry the block with

should have C(s) as a multiple.

If you want to get any further here, provide the numerical values for theta and h, and provide C(s) with numbers for the coefficients.
Also, it appears that the LTI System block linearizes delays to a gain of 1. Don't know why it doesn't offer an option to linearize the delays with a Pade approximation. 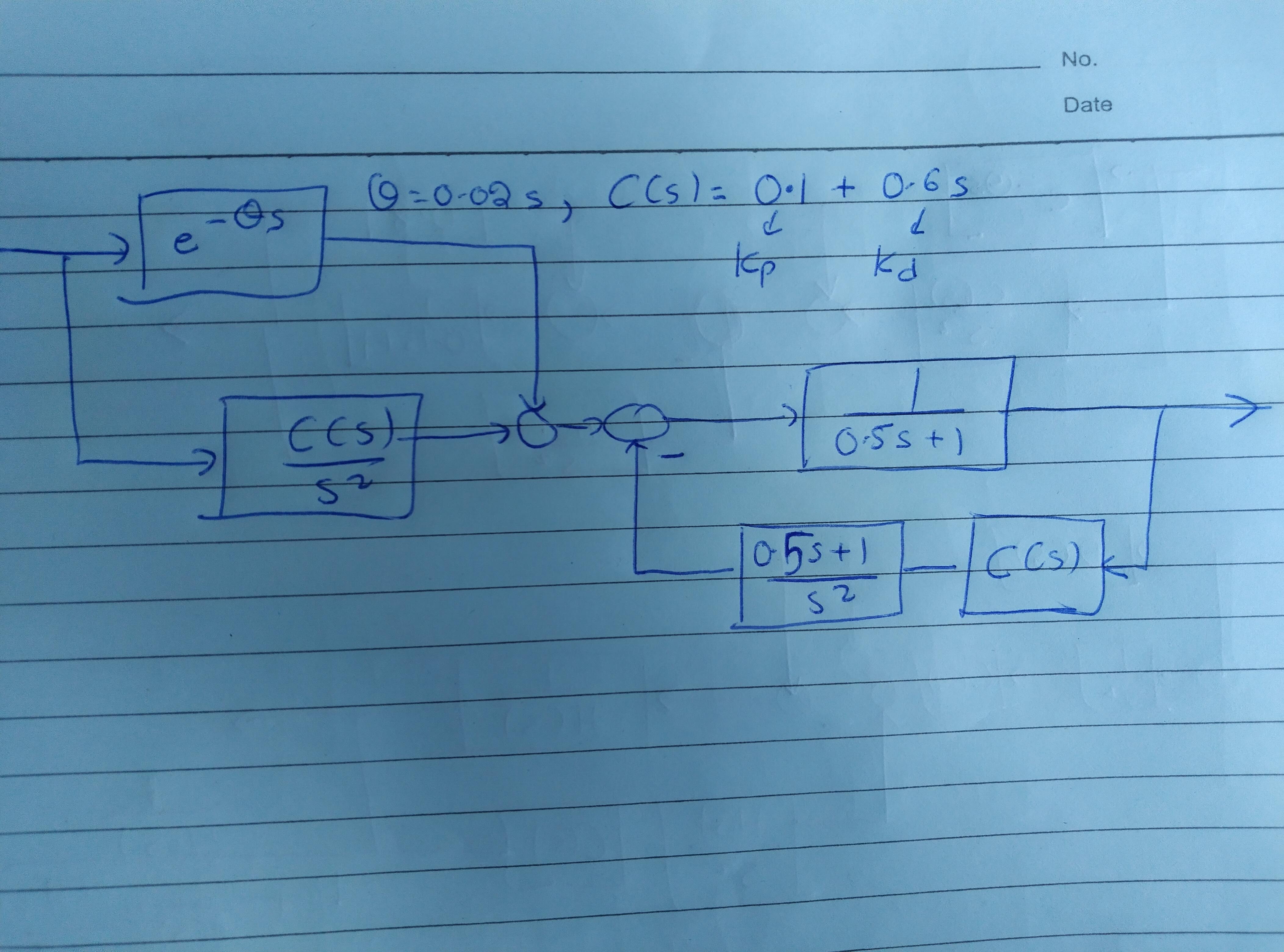 This image will provide you the data you need. I also simplified and corrected the diagram (sorry for that). I tried using the transport delay block and put 0.02 seconds but it did not work properly. Are there other blocks which I could use?

⋮
The new diagram also removed the feedback path with a gain of 0.8.
Anyway, that diagram can be implemented directly in Simulink, except that C(s) will have to be combined with (0.5s + 1)/s^2 into a single Transfer Function block. Is that what you tried?
On the Matlab side, are you trying to get a single LTI system representation from input to output? If so, show your code. If not, please clarify the goal on the Matlab side.

⋮
Yes, on Matlab side, I did make a single LTI system (a tf) and gave an input using the lsim command. When I gave the same input to the shown diagram in Simulink, It gave slighlty different results. The output did not match fully as I mentioned there is a slight overshoot in output but if the delay (theta) is set to zero, the results match. This is where I am facing the problem.

⋮
I need to ask that did they all give the same settling times? I do get the same response too but the settling time does not match.
edit: I could send you the models I have if you can confirm this from your side.

⋮
All three responses match fine.
You can attach your Simulink model (click the paperclip icon). I won't open it, but maybe someone else will. You can also insert a screen capture of your diagram if you think that would help illustrate what you're doing.
You can copy/paste your Matlab code into a comment here. Preferably formatted as code (clide the code icon to the left of the % icon. If you do that, I can then compare your result to mine based on the block diagram in the figure in this comment

⋮
There are two reasons why the linearized model from Simulink does not match Gamma2.
First, as I already stated in this comment it appears that Simulink does not properly linearize the LTI System block if it includes a delay. Personally, I think this is a bug. So, instead of using the LTI System block for the exp(-theta*s), use a Transport Delay block. In its dialog box, set the Time Delay parameter to theta, and make sure to change the parameter for "Pade order (for linearization)" from the default value of zero. A Pade approximant is basically a transfer function that approximates exp(-s*T). Usually you don't need to set the Pade order higher than 2, but you can play around with it.
Second, the PID Controller block does NOT implement Kp + Ki/s + Kd/s. Rather, it implements Kp + Ki/s + Kd*N/(1 + N/s), where the default value of the filter coefficient paramter, N, is 100. You can see all this in the PID Controller dialog box. So in your derivation of Gamma2, everywhere you had Kd*s, replace it with Kd*100/(1+100/s), assuming you're using the default value of N = 100.
If you really want to use pure PD control of the form of Kp + Kd*s, you can modify the diagram to not use the PID Controller blocks. Delete them both. In the foward path, change the double integrator to a Transfer Fucntion block with Numerator parameter [Kd Kp] and Denominator parameter [1 0 0]. However, by doing this you won't be able to set the integrator initial conditions if you had been doing that. In the feedback path, change tf_b to
tf_b=((0.5*s)+1)/(s^2)*(Kp + Kd*s)
This approach (in addition to using the Transport Delay with Pade approximation) should be nearly identical to Gamma2 after linearization. It won't be exactly identical because of the Pade approximation in the Simulink linearization, but it should be awfully close.

⋮
Well thank you for the help but the method you listed gives the same result as the previous one in simulink. The result of Matlab and and simulink settling times is about 0.12 seconds which is close. If this is a bug, is it possible to address it?

⋮
I am actually using N=1, for my PID block in simulink. I linearize the model using the model linearizer in simulink. I get the state space and then use the stepinfo. The result is the same as your code of
sys = linearize('pilyal',getlinio('pilyal'));
I checked with both methods. When pade order of 0, the settling time is 1.95 but with pade of 2, I get 1.75 as settling time.
I finally got the settling time of 1.8191 secs. It turns out that the problem was for the PID equation. I was using kp + kd*s while the PID was setting it to

. I set the pade approximation to 1 (as I had done the approximation for my thesis before by only taking it until degree 1). When it was set to 0, it did not give proper results (I overlooked the parameter before). Thank you for your help.
In Linearization manager, there is an option to linearize models with delays which gives the settling time of 1.8201, so that is also pretty close.
There are some questions though by this, if it is possible for you to answer them. Why are there slight variations? Is it possible to change the equation in PID block to kp +kd*s instead of

⋮
Yes, I did follow the approach as you mentioned. The only difference is if I use the PID block. Is it possible for Matlab devs to do something about it? or I can approach them with this?

⋮
If by "do something about it" you mean add an option for the PID block to implement a pure differentiator, you can always submit an enhancement request as described here.

⋮
Thank you for the help and I have sent a request.

⋮
This is a follow up question to this problem. As I mentioned that I wanted the results of the simulink and the Matlab model to match to some extent. I am facing problem in finding the H infinity norm. For the Matlab model, I get the value of the norm as 1 but for simulink it is infinity. Here is what I am doing.
The other parameters match but not the hinfnorm. Is there something wrong that I am doing?

⋮
Post the entirety of the code used to develop the "Matab model."
Post a screen capture of the Simulink diagram with any additional information such that I can implement it myself.

⋮
Thank you for the help