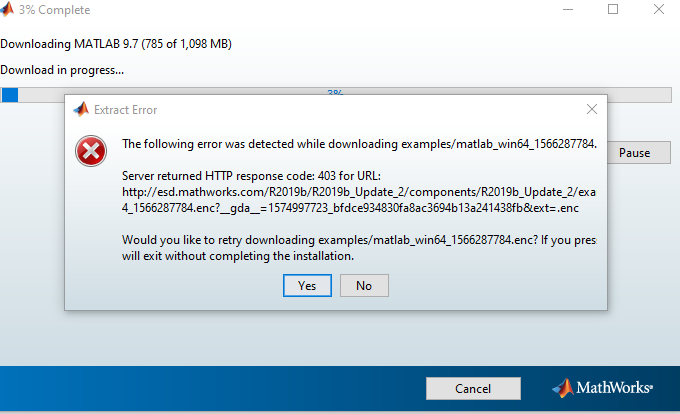 ⋮
"403" means "Access forbidden"
If I recall correctly, esd.mathworks.com is internal use only. I could be wrong about that though.

⋮
I guarantee that this is not a matter of license terms.
If your license does not permit you to fetch Update 2 at all, you would not have gotten that far: you would not have reached the xml file that told you that examples/matlab_win64_1566287784.enc needed to be downloaded.
If you had managed to copy the configuration xml files from another system, but did not have a license to download Update 2 at all, then it would have refused access on some earlier .enc file, as the os-specific examples enc file is not the first .enc in the list.
This is also not a matter of not having access to a particular toolbox, such as if you tried to download an update to Image Processing toolbox even though you had no current license for Image Processing Toolbox: this is the os-specific general MATLAB examples .enc file, so it does not depend upon any toolbox license, just upon the MATLAB license.
No, this is some other issue, such as a firewall or proxy problem, or a glitch in the MATLAB servers.

⋮
thank you so much, it solved !