⋮
It would be very useful if you mention, what "does not work" means. I cannot imagine, what "mess up the code" means.

⋮
Sorry. By "does not work" I mean there is no legend to be found anywhere in the plot. By "mess up the code" I mean that, depending on where I put the legend line, different things go wrong. For instance, if I keep everything else the same but put the legend line after the 2nd plot line, there is still no legend, but also logarithmic axes and axis labels are disabled. 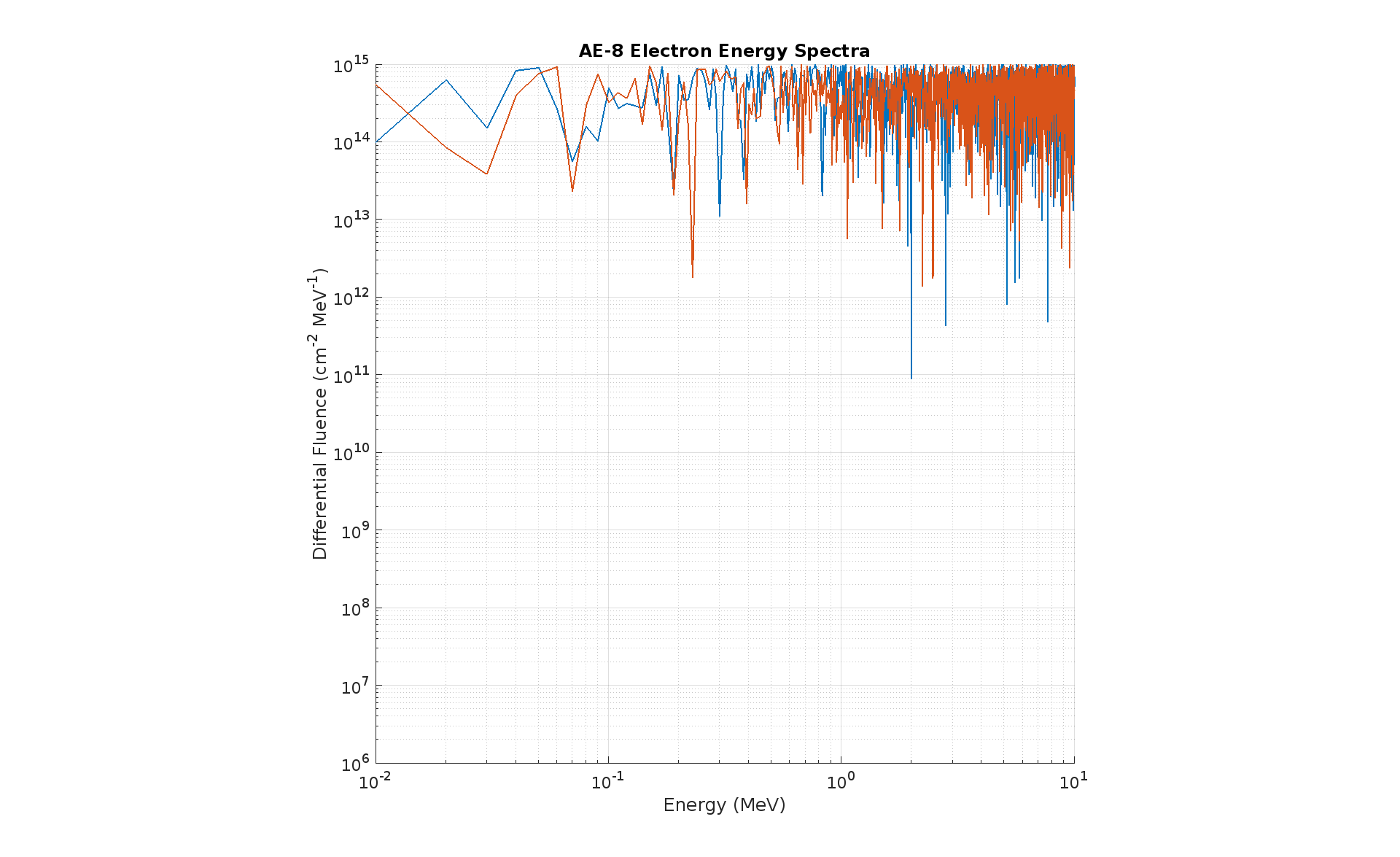 legend('Solar Maximum', 'Solar Minimum', 16)
Error using legend
Invalid argument. Type 'help legend' for more information.
Eliminate the ‘16’ or use it as part of a name-value pair, and it should work.
.

⋮
Face palm. Thank you, this solved it. There was definitely no error though!

⋮
As always, my pleasure!
‘Face palm.’
You’re in very good company in that regard from time to time, myself included!
Interesting that it didn’t throw an error. I have no explanation for that.
.

dpb 2022-8-9
⋮
编辑：dpb 2022-8-9
Try something like
figure
pbaspect([1 1 1])
loglog(ElectronEnergy(:), [ElectronDifFlue(:) ElectronSolMinDifFlue(:)], 'LineWidth', 1.5)
xlim([0.01 10 1E6 1E15])
grid on
hAx=gca;
hAx.FontSize=16;
title('AE-8 Electron Energy Spectra')
xlabel('Energy (MeV)')
ylabel('Differential Fluence (cm^{-2} MeV^{-1})')
legend('Solar Maximum', 'Solar Minimum')
Simplify first...|hold on| first is often not a good idea; that bypasses quite a bit of the behind-the-scenes preparations for figures done by default; wait until the first line is drawn and want to add additional data onto the same axes. But, all the basic plot functions handle multiple columns(*) as independent vectors; put the two together as shown. Then, save some code/typing by using the loglog function to do the axes scale at first...then do the annotation stuff later on after the lines are drawn. This doesn't really matter all that much other than for code organization.
Lastly, my guess is that the problem with legend is one that there simply isn't sufficient room when you try to use such a large font size -- I left the "16" in, but even that may be larger than what there is room to put on a default figure size...sometimes there just simply isn't enough real estate available and one has to accept that.
(*) The (:) ensures are column vectors to catenate; if your data are already column vectors can dispense with.