I can't figure out how to write equations of motion into Matlab.

I've been trying to utilize the ode45 function and directly writing down the equations to no avail. Can I get a nudge into the right direction? Any help would be greatly appreciated.

. Is ω a constant, the carousel rotation rate? Is Θ the time-varying angular position of the puck, in an inertial, i.e. non-rotating, reference frame?
You say v = tangential velocity. Is that in the non-rotating frame? Can you express v in terms of x and Θ, or in terms of

. I assume that you can write the velocity v as a function of x and theta.
You will need to create a derivative function which returns a 1x4 vector whose elements are

⋮
@Alejandro Nava,
See attached code. This code runs.
The errors you encountered are due to:
I added code to plot the results. The results do not look very realistic. But I believe they are an accurate result of the equations of motion which we have defined. 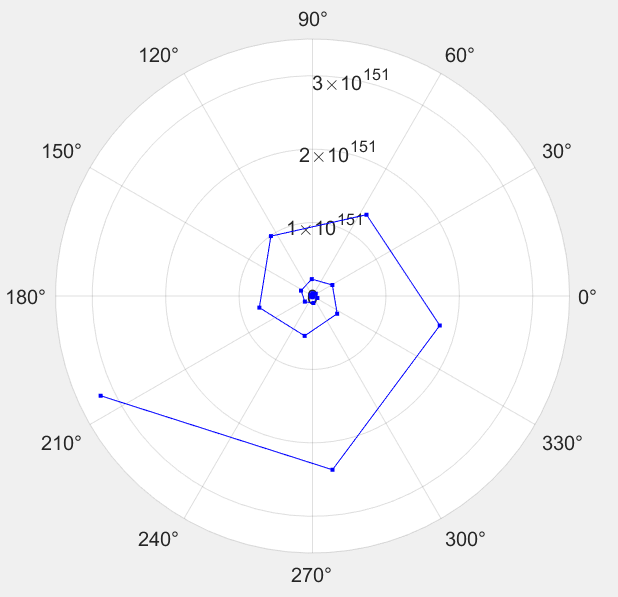 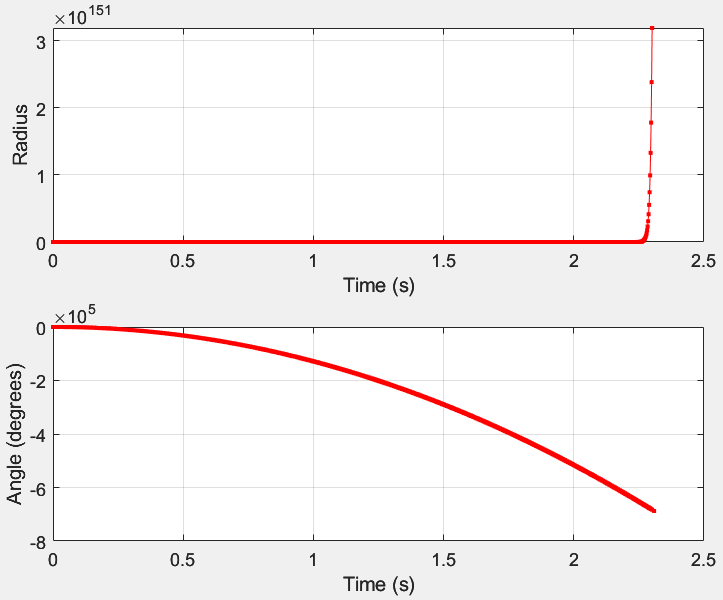 ⋮
Thank you for your code. I managed to get a running code earlier which shows what seems to be a more accurate plot. 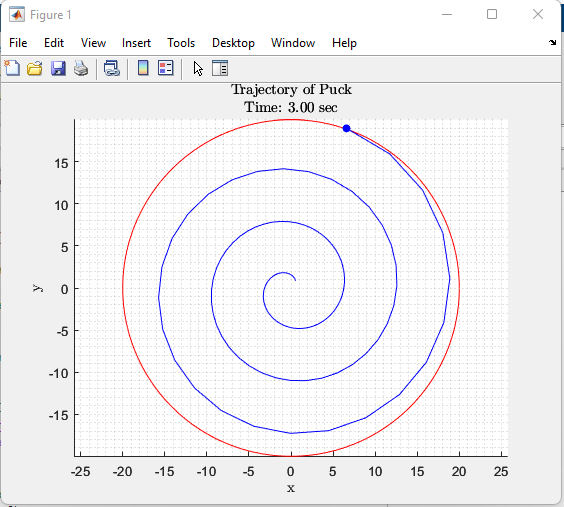 Let me know what you think.

⋮
@Alejandro Nava, the plot looks great!
Cpngratulations on getting it working.
I see that the state vector now has six elements, rather than four. The code to convert from polar to Cartesian coordinates suggests that y(:,1)=radius and y(:,2)=theta. I believe that theta is measured in the rotating frame, because the equaitons of motion in your original posting appear to be a form of the Coriolis equaitons for movement relative to a rotating frame of reference.
The code for the differential equations, in carousel.m, specifies that

. I do not understand why these are the correct derivatives.
Finally, carousel.m indicates that

.
The specified equatons for y5 and y6 in carousel.m suggest that you consider y3 to equal dr/dt, and that you consider y4 to equal dTheta/dt. However, as noted above, the equaitons as written also suggest y5 equals dr/dt, and y6 equuals dTheta/dt. Thus there appears to be an inconsistency.
In the equaiton for y5, you use y4/R in place of v. Is this correct? I suppose it depends in part on the definition of v. Is v the puck velocity? If so, measured in what frame? Why do you use a constant value of R in the equaiton for v? The equation

does not describe the puck's velocity in the inertial frame.
The constant w, defined in carousel.m, does not appear to be used. Why not? I am afraid that its non-use reflects confusion about the equivalence and/or role of ω and

.
carousel.m defines R=3, in line 2. This means the value of R that is passed from the calling program is not used. Perhaps that is a mistake.
Does the frame rotate at a constant rate? In your original Coriolis equations of motion, ω is the angular velocity of the frame, relative to an inertial frame. Do not confuse ω with

. They are not equal.
I am sorry if all my comments seem overly critical. The comments only show that I do not understand your code.