Analyze signals and images in the wavelet domain

Wavelet transforms are mathematical tools for analyzing data where features vary over different scales. For signals, features can be frequencies varying over time, transients, or slowly varying trends. For images, features include edges and textures. Wavelet transforms were primarily created to address limitations of the Fourier transform.

While Fourier analysis consists of decomposing a signal into sine waves of specific frequencies, wavelet analysis is based on decomposing signals into shifted and scaled versions of a wavelet. A wavelet, unlike a sine wave, is a rapidly decaying, wave-like oscillation. This enables wavelets to represent data across multiple scales. Different wavelets can be used depending on the application. Wavelet Toolbox™ for use with MATLAB® supports Morlet, Morse, Daubechies, and other wavelets used in wavelet analysis.

The continuous wavelet transform is a time-frequency transform, which is ideal for analysis of non-stationary signals. A signal being nonstationary means that its frequency-domain representation changes over time. CWT is similar to the short-time Fourier transform (STFT). The STFT uses a fixed window to create a local frequency analysis, while CWT tiles the time-frequency plane with variable-sized windows. The window widens in time, making it suitable for low-frequency phenomena, and narrows for high-frequency phenomena. The continuous wavelet transform can be used to analyze transient behavior, rapidly changing frequencies, and slowly varying behavior.

Analyzing a hyperbolic chirp signal (left) with two components that vary over time in MATLAB. The short-time Fourier transform (center) does not clearly distinguish the instantaneous frequencies, but the continuous wavelet transform (right) accurately captures them. See the MATLAB code. 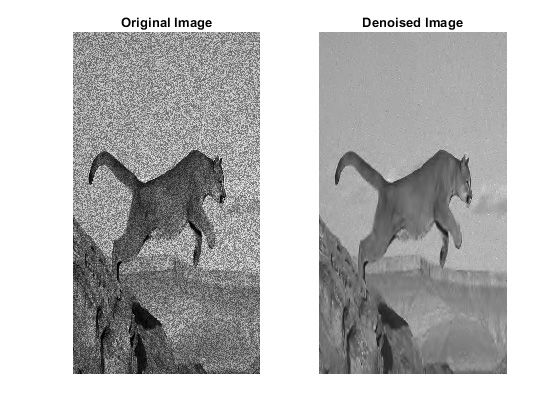 Original (left) and denoised (right) images. The image was denoised while preserving the edges using a wavelet denoising function. See the MATLAB code.

For more information on applying wavelet techniques and selecting the right wavelets for your application in MATLAB, see Wavelet Toolbox.